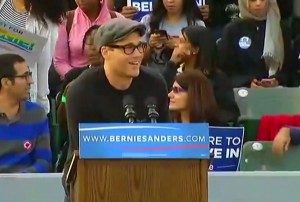 On the cusp of his win in Oregon and narrow defeat in Kentucky Tuesday, Bernie Sanders held a really long rally in Carson, California, and the first speaker at that rally exposed one of the key weaknesses or strengths of Sanders’ campaign, depending on your point of view. Actor Nick Zano kicked off the proceedings with a five-minute speech that sort of focused on women, in that Zano mentioned being raised by “seven women from three different generations,” then joked “Please, unless you’re clapping that I survived, thank you.”

The actor then proceeded to explain to the crowd what he learned from living with seven women, and how things might have been different with a leader like Bernie Sanders in charge:

You learn a lot about being a man when you live in a small house with seven women. But if I’m being totally honest, all they told me is what they didn’t like about men. And I didn’t know what women liked for years, I still don’t quite have a grasp on it today.

You don’t say? I’m pretty sure they really like being described as something you “survived,” stick with that.

I waited through the whole five-minute speech for Zano to circle back and explain how living with these women enriched his life, or how he followed their example to achieve success or something, but the actual point of the story was that these women wouldn’t have been such miserable man-haters if they’d only had equal, livable pay.

Even if you want to ignore that ham-fistery, though, what Zano then does is immediately pivot away from equal pay to a policy that’s for everyone, the $15 minimum wage, which is the Sanders campaign’s philosophy in a nutshell. Whatever is good for everyone is especially good for you, women, black people, Hispanics, LGBTQ people, and what’s good for everyone is usually whatever is bad for millionaires and billionaires. It’s a strength for anyone who thinks that the key to Democratic victory is wooing white independents while trusting everyone else to come around once they get to know Bernie, but it’s a weakness for everyone else.