Never fear conspiracy theorists of the world! The Birthers are alive and well and advertising in the pages of the Washington Times. And what an advertisement it is. It’s unclear what is more offensive here: the accusation that President Obama is not an American citizen, or the ape imagery. The former, of course, is utterly ridiculous. The latter is not. Also, now Obama is British.

Ape imagery has well-documented racist undertones, making it fairly difficult to miss the subtle message here. Earlier this year the New York Post got in some very hot water for publishing a cartoon depicting policemen shooting a monkey that many interpreted to represent President Obama. To pair that sort of imagery with birther claims is a double insult, that at the same time may ironically get right to the heart of the matter: Why are some people so convinced the president wasn’t born here? Could it possibly have anything to do with the color of his skin.

The claims in the actual, full-page advertisement — the WT has run birther ads before, by the way — are as ridiculous as you might expect. Now Obama is British. According to the ad, the British Nationality Act of 1948 applied to Obama’s Kenyan-born father therefore making Obama a British subject. What it neglects to mention is this:

The Center for American Progress’ Ian Millhiser points out that if this rule were actually applied to the presidency, every foreign nation would have the power to remove the President of the United States simply by granting the president citizenship.

So at least he’s in good company, I suppose. Advertisement below: 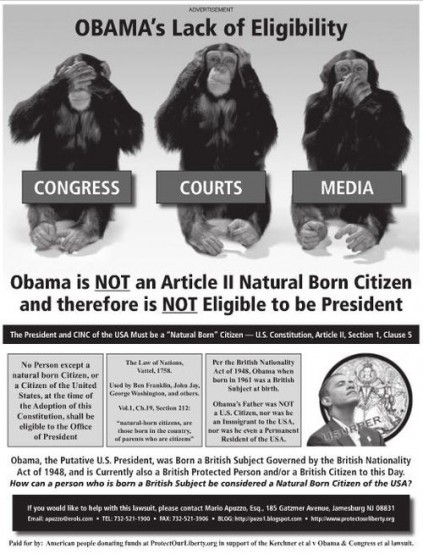