Breaking: President Obama Is NOT A Justin Bieber Fan 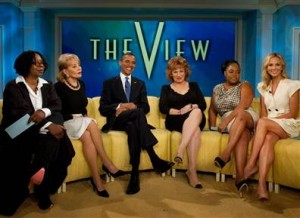 Our friends at Gossip Cop have cracked open a potentially huge story that perfectly captures the divided nation in which we now find ourselves. During the much criticized taping of The View this morning, President Obama revealed that he does not have Justin Beiber on his iPod. Given that Bieber is a Canadian pop star, this clearly has Foreign Policy implications.

President Obama finds himself in New York city for fund raising purposes as well as this appearance on the ABC daytime talk show, which airs later today (Thursday) at 11:00 AM.

ELISABETH HASSELBECK: Have you thought about an iPhone at all, making the switch?

PRESIDENT OBAMA: I haven’t made the switch yet. I do have a pod though; I’ve got a great iPod

WHOOPI GOLDBERG: Can I ask you what’s the first couple of songs on your iPod?

PRESIDENT BARACK OBAMA: You name a song, I’ve got it. Whether it’s (pauses)

WHOOPI GOLDBERG: “Didn’t I Blow Your Mind This Time”?

PRESIDENT BARACK OBAMA: I’ve got Maria Callas on there

PRESIDENT BARACK OBAMA: I do not have Justin Bieber on there

BARBARA WALTERS: No but I bet your kids have Justin Bieber on there, but I have met Justin Bieber he came to sing at the White House. He’s a very nice young man

For more information about Obama’s appearance on The View (and other Justin Bieber news) please check out Mediaite’s sister site GossipCop.Com.