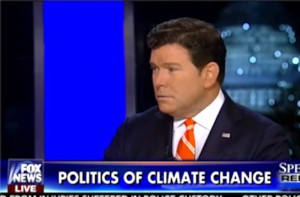 It’s being reported that the Justice Department may be investigating energy companies to see if they’ve been purposefully misleading the public about climate change. From this scant thread, Special Report with Bret Baier spun not one, but two, segments Thursday night cynically calibrated to stoke outrage by selling a specious premise that the Obama administration is waging a “campaign against politically incorrect thinking.”

“Some of the millions of people around the world who do not believe man is responsible for global warming could soon be facing more than just mockery from the left,” Baier began. “President Obama’s top lawyer admits the government is considering much more forceful action.”

Baier’s phrasing implied that Attorney General Loretta Lynch is seeking to prosecute climate denial in its most workaday form, a notion which he brazenly advanced twice in his show and which is patently false. The segments are pieced together to make the unmistakeable charge that conservatism itself is coming under assault. And in the bizarro roundtable discussion that closes out the hour, viewers are taken from a potential racketeering probe to an Orwellian nightmare scenario featuring a “totalitarian, authoritarian” federal government.

This admission took place at a Senate Judiciary hearing on Wednesday, and was reported previously by conservative outlets Breitbart and CNSNews.

This is a familiar song from Whitehouse, who published an op-ed in the Washington Post last May arguing the same point, in which he wrote that the “parallels between what the tobacco industry did and what the fossil fuel industry is doing now are striking.”

The malfeasance Whitehouse alluded to in his op-ed and in his question to Lynch was the campaign of misinformation that the tobacco companies perpetrated upon the American people for decades, so a look back at the DoJ’s investigation into the tobacco industry may be instructive. According to the Justice Department’s final report, the major cigarette companies were guilty of “engaging in a lengthy, unlawful conspiracy to deceive the American public about the health effects of smoking and environmental tobacco smoke.”

Specifically, the report continues: “they vetted scientific research papers and reports as well as public relations materials to ensure that the interests of the Enterprise would be protected; they identified ‘friendly’ scientific witnesses, subsidized them with grants […], paid them enormous fees, and often hid the relationship between those witnesses and the industry.”

That is the sort of massive misconduct that Whitehouse is inquiring about — not the armchair climate skepticism of conservative uncles that, in Baier’s phrasing, invites “mockery from the left.”  It is not “climate denial” that these companies could be prosecuted for — but the potential criminal act of marshaling titanic financial resources to support, fund, and publicize pseudoscience with the deliberate intention of misinforming the American public.

It’s worth noting that State Attorneys General in New York and California are already pursuing similar investigations into the energy companies’ alleged practice of denying climate science. And it was Congressman Ted Lieu (D-CA) who asked the Justice Department to investigate, specifically, ExxonMobil for potentially misleading the public about the role fossil fuels play in climate change.

Lynch’s reply to Whitehouse’s query was hardly saber-rattling. “We have received information about it,” she said, “and have referred it to the FBI to consider whether or not it meets the criteria for what we could take action on.”

The segment disingenuously parsed Lynch’s reply, finding a smoking gun even in her cautious, anodyne response, in which she basically described what the Department of Justice does every day. Their smoking gun? Her incendiary use of the word “could,” which the show desperately and absurdly tried to dismantle in each segment.

“Some analysts express concern about the disclosure and particularly with Lynch’s language,” Rosen said. “Specifically her statement that the probe was initiated with the intention of seeing whether action could be taken against the groups.”

Cut to former Deputy Assistant Attorney General Michael Carvin, who, coincidentally, represented the tobacco companies in their fight against the Justice Department. Carvin argued, “The Attorney General’s use of the word could is very telling […] because it’s not as if they’re going to analyze these issues on the merits and say, ‘Would we,’ or ‘Should we do it?’ They’re looking for a pretext: ‘Could we go after them?'”

But this is when the segment made its most egregious leap. Rosen argued that the federal government investigating corporations’ peddling false science on climate change had its closest point of comparison not in the tobacco companies — but in Tea Party groups targeted for their political beliefs. “Any federal action on opponents of the administration on change issues would evoke parallels with the IRS scandal of 2013,” Rosen said, before taking his segment on a broad detour to exhume the scandal, in which IRS agents in 2010 gave extra scrutiny to conservative non-profit groups specifically because they identified as “Tea Party,” “patriot,” or likewise.

The association with the Tea Party-IRS scandal insincerely suggests that the federal government would investigate energy corporations not because of an alleged concerted effort to deceive the public, but because it wished to punish political beliefs that run contrary to the administration’s. In this formulation, the target is not criminal conspiracy, but — as Baier framed it — political incorrectness.

This is a crass, misleading mischaracterization. People are, of course, free to ignore the data supporting man-made climate change, but orchestrating an operation to fund and disseminate phony science to mislead the public (as the tobacco companies did) would be illegal.

That distinction disappeared completely in the second segment Baier devoted to the topic. During the commentary panel jam session which closed out the show, things got awfully far afield, with Fox commentators drawing a direct line from RICO to thoughtcrime.

Lynch’s use of the word “could” got another round of the piñata treatment, first from Charles Krauthammer, who suggested that if the investigation went forward, it would be an “impeachable action.” He added that Lynch’s answer at the hearing (which, again, could roughly be rephrased as “We got a tip, and we’re looking into it”) provided “insight into the mentality — the totalitarian, authoritarian of these people.”

The panel once again drew specious parallels between non-profit conservative organizations and multinational energy behemoths, with Krauthammer noting that this was another example of the executive branch “using the instruments of power, […] discriminating against those who are anti-Obama, conservative, or Tea Party.”

Baier noted that there were perhaps analogues between energy companies’ climate denial lobbying today and the cigarette companies’ onetime practice of buying and distributing phony research. Rather than answer that, Laura Ingraham whipped out a wisecrack, claiming that the whole situation reminded her of “speech codes on college campuses — but it’s on steroids.” Good one.

Ingraham concluded that if the DoJ were to investigate energy companies’ climate denial operations, such a probe would be “ideological at its core” — an apropos way to close the hour and fitting epigram for both segments.

It is absurd and deceptive to equate Tea Party groups targeted for their conservative politics with energy conglomerates who are potentially lying on a massive scale to further their business interests. And Baier, his segment producers, and his guests flagrantly drew explicit and spurious parallels between the two in order to advance a narrative that the Obama administration persecutes and prosecutes conservatives on a regular basis.

This is not about speech and beliefs but about schemes to defraud. Baier is smart enough to know the difference, which makes Thursday night’s show all the more disappointing.