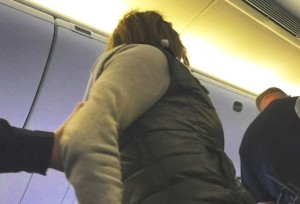 A female passenger tried and failed to open a plane exit door on British Airways Flight 213 bound for Boston.

According to WCVB, the plane took off from London Heathrow Airport on Tuesday morning and is due to land in Boston at 1:30 p.m. ET.

A group of Massachusetts State Police, Homeland Security agents and the Joint Terrorism Task Force are waiting at Logan Airport in Boston.

UPDATE–1:34 p.m. ET: Mass. State Police tweeted that they were awaiting the plane at Logan Airport, where they would arrest the female passenger.

MSP Troopers awaiting British Airways flight at Logan on which passenger has been restrained. We will confirm more when possible.

Airline reported to MSP that female passenger has been restrained during flight, allegedly for trying to enter cockpit. — Mass State Police (@MassStatePolice) November 17, 2015

UPDATE–1:47 p.m. ET: According to an airline spokesperson, the female passenger had tried to open one of the plane’s exit doors.

The earlier reports regarding the cockpit were, and remain, unconfirmed.

UPDATE–1:53 p.m. ET: An FAA spokesperson confirmed that the female passenger tried to open a plane exit door, and not gain entry to the cockpit.

The suspect, as well as the flight crew and the passengers, are currently being interviewed. UPDATE–2:09 p.m. ET: Mass. State Police say the passenger “was intoxicated” when she tried to open the exit door. No attempt was made on the cockpit.

Those aren’t bracelets… Someone got arrested ✈️ #britishairways #boston

UPDATE–2:29 p.m. ET: Despite there being no terror threat, authorities remain on high alert at Logan Airport, as evidenced by this photo from a local WBZ reporter.

High security at Logan. But, the #BritishAirways incident appears to have been fueled by alcohol Not terrorism. pic.twitter.com/bKRwOsSVSY

We will update this story as more information becomes available.