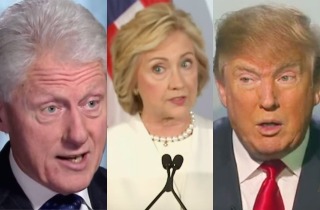 You can criticize Donald Trump for a myriad of things… it’s been done in this space more than a few times. He’s got the social maturity of a sophomore. He’s more thin-skinned than even the current Commander-in-Chief when it comes to what he perceives as unfair or misguided media coverage. He’ll never be accused of being specific on policy and will almost always be accused of hyperbole on pretty much everything else. Yet here he is up 21 points on his nearest competitor (Ted Cruz) in CNN’s latest poll, up the same percentage in a Fox News poll, up 23 in the ABC News/Washington Post poll, up 27 in a Monmouth University poll. He’s the Jason Voorhees of presidential politics: killed off at least a dozen times for comments the pundits (including this guy) said would be the turning point, the start of an irreversible downfall.

But as we witness time and again, the polls do the opposite of conventional thinking and the lead only expands. And after nearly seven months of hearing Trump allegedly say totally the wrong thing and stepping over some imaginary red line of decency, there’s only one conclusion that can be made as we exit 2015 when it comes to his political compass and messaging decisions:

Trump is more shrewd than anyone is giving him credit for. These numbers say it all: Democratic frontrunner Hillary Clinton has spent $12 million on her campaign thus far, while Trump has spent just $217,000 (or nearly $38 million less than Jeb Bush). How does that happen? Free advertising via dominating every news cycle since June outside of big breaking news.

Think back to all the supposed gaffes that led to polling bumps since announcing his candidacy: Mock John McCain’s status as a war hero (“He’s a war hero because he was captured. I like people who weren’t captured.”), the numbers go up after every pundit in the country insisted the opposite would occur. Call journalists “scum” – the numbers go up. Declare a temporary ban on Muslims entering the country (which we were told would be the absolute final straw) – the numbers go up. But it was this exchange with ABC Reporter Tom Llamas in August over the term “anchor babies” that captured the essence of Trump’s rise better than any of them:

Trump: “You mean it’s not politically correct, and yet everybody uses it.”

Llamas: “Look it up in the dictionary! It’s offensive!”

There are literally dozens of other examples of Trump following the George Costanza/Opposite Day rule (in this case, doing the opposite of what every politician has done prior on a national stage and getting a positive result), but let’s stick to those four to show how – in retrospect – it was the right way to go if getting the nomination is the immediate goal:

John McCain: Always a darling of the media (using how often he gets booked for interviews as an indicator), attacking McCain – a former presidential candidate and P.O.W. — was viewed as a no-win situation. But when looking at McCain’s approval ratings in his own state (30 approve/54 disapprove) and Congress in general (RCP average: 13.2 percent), Trump tapped into conservative angst over the blowout losses in 2008 (Obama over McCain 365-173) and 2012 (Obama over Romney, 332-206). On the latter, Trump hasn’t been shy about slamming Romney, either. The message that appears to be resonating? I’m not McCain. I’m not Romney. Unlike them, I’ll punch back – opponents, media, doesn’t matter — and be unapologetic in doing so. Ask any Trump supporter what they like about him most and the answer is invariably the same: “He isn’t afraid to say what’s right.” Those who are loyal to Trump feel that — via his conviction — he is filling a leadership void by tackling touchy subjects others running for president (or those who are currently in power) won’t dare go near.

Attacking the press: As we’ve seen lately and particularly during and after the CNBC debate, calling out the media for being biased and unfair can do wonders (polling, fundraising) in the primary season. Know this: Those who work in this industry (and especially on the broadcast side) have very high opinions of themselves. Condescending self-importance is strong in the media bubble: we’re smarter than you, we’re more articulate than you and therefore generally know what’s best for you. That perception only fuels spiraling poll numbers for the media as a whole: Eight in ten Americans view TV reporters unfavorably. Six in ten don’t trust the media in general (Gallup).

Going after the press may result in the more attacks in return directed at Trump, but does that actually hurt him? The old school thinking used to be to play defense and show remorse when the media mob demanded it. But Trump does the opposite and his loyalty only grows. If he wins the nomination, this approach may not play well in the general, but it’s one of the reasons he enjoys this kind of lead in a crowded GOP field right now.

Temporary ban on Muslims: Most polls showed about six in ten Americans oppose a temporary ban on Muslims entering the country. Bad news for Trump, right? Not when winning the nomination is the immediate goal, as six in ten Republicans support said yes to a temporary ban. Combine that with polls showing a 53-28 approve/disapprove gap on Syrian refugees entering the country (regardless of political affiliation), and Trump suddenly has a winning hand on the issue (with GOP primary voters) despite being slammed for even broaching the subject.

Punching back when challenged: The Tom Llamas/anchor babies exchange is Trump in a nutshell: He’s not only unapologetic, but pushes back when pushed. Llamas – who really shouldn’t be editorializing/grandstanding in his role as a news correspondent in the manner he did – simply didn’t know how to respond and hasn’t been heard from much on the topic since. GOP voters have grown accustomed to their candidates dancing to the media narrative. With Trump, they see the process reversed, with him setting the tone instead.

These examples are now being rehashed and presented for this reason: almost everyone with an opinion in political media is warning Trump not to broach Bill Clinton’s checkered past with it comes to his treatment of women. You can argue the semantics around it, but any reasonable person would agree it wasn’t what one would call exemplary. So when Trump says Hillary’s husband is fair game – particularly when she pontificates around anything involving sexism and/or a war on women – if we’ve learned anything from this year, it’s that Trump knows what he’s doing when he steps into areas deemed political quicksand:

Hillary Clinton has announced that she is letting her husband out to campaign but HE'S DEMONSTRATED A PENCHANT FOR SEXISM, so inappropriate!

We keep hearing lately that Trump broaching Bill Clinton’s personal past would be at his own peril. Hillary can now play the victim and therefore gain sympathy, they say. But there’s something different about Trump daring to go down this road by counter-punching the Clintons on Bill’s “penchant for sexism”, and again, it’s quietly shrewd: Hillary — who has serious trust issues from voters in her own right (6 in 10 Americans don’t trust her, which is higher than Trump’s numbers on the topic) — is now on the defensive on this issue as news organizations give Trump’s comments about Bill Clinton’s past and Hillary’s obvious hypocrisy on the matter considerable airtime. In the end, this brings the fight into the mud where Trump — and a media that can never resist a food fight — likes it… and it’s a place where establishment candidates are thrown way off their game if Jeb Bush’s awkward retorts to Trump on basically anything personal are any indication.

Ruth Marcus, a liberal columnist for The Washington Post, sums up Trump’s strategy thusly (and uniquely):

Hillary Clinton has made two moves that lead me, gulp, to agree with Trump on the fair game front. She is (smartly) using her husband as a campaign surrogate, and simultaneously (correctly) calling Trump sexist.

These moves open a dangerous door. It should surprise no one that Trump has barged right through it.

If his compass when decisively crossing red lines before are the guide, it may not be the losing strategy most pundits – who have been wrong at every turn on his candidacy even before it began – keep insisting it is.