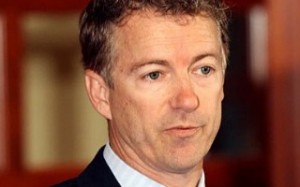 Sen. Rand Paul‘s filibuster about drones yesterday drew the predictable, yet apt, parallels to Mr. Smith Goes to Washington, receiving significant praise from both sides of the politics spectrum. The Wall Street Journal editorial board was not among those lauding the senator, however, instead deeming the performance a “rant” and asking him to “calm down.”

Noting Paul’s “theatrical timing,” the editorial, entitled “Rand Paul’s Rant,” remarked, “If only his reasoning matched the showmanship.” It went on to note the senator’s hypothetical about the use of a drone strike on an American sitting at a café, criticizing that while he was serious, his argument was not.

“Calm down, Senator,” the WSJ urged, asserting that Attorney General Eric Holder was correct when asked about the use of drone strikes on American soil. In a letter, Holder said the Obama administration has not carried out drone strikes on U.S. citizens on American soil, nor does it intend to — but added that it may be possible to imagine an “extraordinary circumstance in which it would be necessary and appropriate.”

While Holder may not have explained the law clearly, the editorial sought to do so (emphasis theirs):

The U.S. government cannot randomly target American citizens on U.S. soil or anywhere else. What it can do under the laws of war is target an “enemy combatant” anywhere at anytime, including on U.S. soil. This includes a U.S. citizen who is also an enemy combatant. The President can designate such a combatant if he belongs to an entity—a government, say, or a terrorist network like al Qaeda—that has taken up arms against the United States as part of an internationally recognized armed conflict. That does not include Hanoi Jane.

Yes, the country does need more senators who care about civil liberties, the editorial agreed in conclusion. But took issue with the way Paul expressed his concern yesterday, arguing that we need more than “political stunts that fire up impressionable libertarian kids in their college dorms.”

Paul, the WSJ asserted, “needs to know what he’s talking about.”