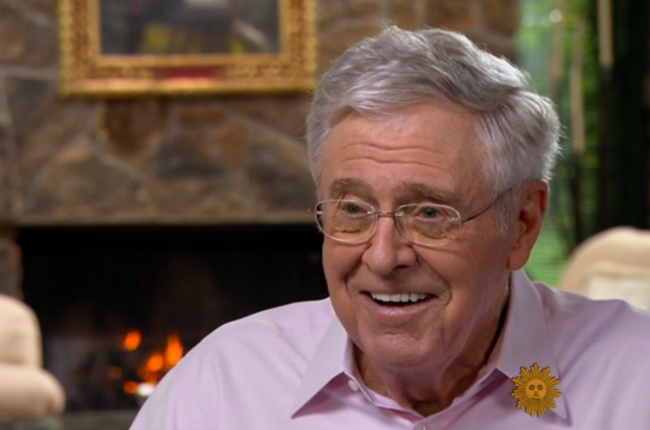 As part of CBS Sunday Morning this weekend, billionaire Charles Koch did a rare sit-down interview with Anthony Mason. I was struck with Koch’s willingness to open his home, office, and business philosophies to a national audience; that is, until I realized that his new book Good Profit: How Creating Value for Others Built One of the World’s Most Successful Companies comes out tomorrow. Even in this rare glimpse of humanity and personality, the dollar seems to rule all decisions.

Regardless of the clear attempt to humanize an otherwise reclusive and little-known figure on the eve of his next book’s release, the interview was exactly what Koch (presumably) was hoping for: showing a well-natured side of the man that Mason called representative of “corporate villainy”. Here are my top takeaways from the CBS interview.

We all know the classic motif of a son who inherits the father’s business and is forced to live up to paternal expectations; even Charles Koch doesn’t seem immune to this. In his office, Koch sits beneath an intimidating portrait of his father, Fred C. Koch, the patriarch of an oil refinery business that was handed down.

On the wall behind his desk is a framed hand-written letter from the senior Koch to his son. The camera panned a key line of text:

“If you choose to let this money destroy your initiative and independence then it will be a curse to you and my action in giving it to you will have been a mistake.”

After reading it aloud, Koch concluded simply, “So that’s the way he was”.

He Seems To Revel In The Haters

Charles Koch makes no qualms about being a highly villainized member of the political public. With a good laugh, he showed Anthony Mason a framed anti-Koch New Yorker cartoon, clearly representing some of the leftist media that regularly rails against the Koch Brothers.

He seems to have a solid understanding of just how demonized he and his brother David Koch have become, and even laughed as he told Mason that he’s now on Al Qaeda’s “hit list”.

He’s More Aligned with Obama Than You Would Think

Given the severe nature with which Charles Koch is painted with a strong conservative paintbrush, it may be surprising to learn that some of his initiatives actually align with Obama administration policies. Most notably, President Obama’s work regarding the US prison system is of great interest to Koch, a self-described libertarian, who advocates for less federal government interference across the board. Koch believes that prison sentences should be severely reduced for nonviolent offenders; the Koch brothers also donated $25 million to the United Negro College Fund.

Just A Family Man At Heart

The interview provided an opportunity for viewers to meet Koch’s wife Liz Koch, who he has been married to for 43 years. They live and continue to operate Koch Industries out of Wichita, Kansas just as his father had done. Liza Koch let on, “[Charles] could have moved many times. [He] could have moved Koch Industries anywhere in the world he wanted to. But this is a great place for raising children and running a business with values.”And although this interview with Mason did not frequently reference his brother David, Charles Koch did admit that one of the toughest times in his career came in the early 80’s as a result of a Koch family civil war.

He’s Not a Republican, But…

Anthony Mason asked Koch about his political affiliation, and while he stopped short of identifying himself as a Republican, he did admit that the principles of the right seemed to be less damaging than those of the left. Koch is very critical of President George W. Bush, and his legacy of increasing the size of the federal government. He continued:

He said that he believes the Republicans are “less unproductive” than Democrats, offering a brief glimpse into why the majority of Koch-bankrolled candidates come from the GOP.

He Distances Himself From Scott Walker

Like anyone else watching the Koch interview, I waited for the inevitable questions regarding failed GOP Presidential candidate Scott Walker. When Walker, often associate as a frequent recipient of Koch money, was mentioned by Mason, Koch simply chalked up support to a brief off-the-cuff remark once made by his brother. Regarding Walker’s campaign for the Presidency, Koch remarked, “Well I thought it would resonate better, but he wasn’t a very good campaigner. You may agree with us on a number of issues, but if you’re presenting them in a way that doesn’t resonate, that doesn’t do any good.”

At 79-years-old, Charles Koch is showing no signs of letting up anytime soon. He still shows up and begins work at his desk every morning by 7:15 AM, and is heavily involved is a wide-ranging number of political action and advocacy groups that stand for libertarian principles. Groups such as Americans For Prosperity, Freedom Partners, and the 60 Plus Association are just small pieces of the Koch empire, and Charles Koch believes he is a part of a burgeoning free market.

He told Mason, “I decided long ago I would rather die for something than live for nothing.”

If you had the CBS interview alone to judge off of, you would assume Charles Koch to be a gracious and amiable man who seems driven by principle. I suspect that his book Good Profit — due out tomorrow — attempts to present a balance between personal character and national self-interests. His interview with Anthony Mason revealed him to be a warm and funny leader with a self-effacing humor that would make voters swoon if he were on tomorrow night’s debate stage. Check out the above video from CBS and decide for yourself if anything challenges your preconceived notions invariably associated at the utterance of the infamous “Koch” name.