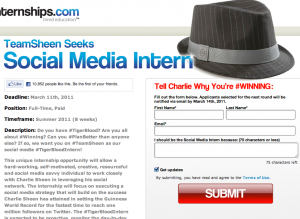 It’s an ultra high profile gig: providing social media services to one of the most widely followed Twitterers in the world, and catapulting you right into a nonstop reality show being covered by 24/7 tabloid and mainstream media. Run for your life.

Charlie Sheen posted his ad for a social media intern Monday (“hardworking, self-motivated, creative, resourceful and social media savvy individual to work closely with him to leverage his social media network”), and the response–as expected–has been intense. Aol’s David Moye reports thousands have already applied. But is it a smart career move?

Gutman admits that whoever gets chosen will get a lot of experience quickly, but says the downside is “you’re working for a drug addict and a psychopath.”

“Take this job and you’re selling your soul,” he said. “I can’t imagine how much professional experience you’ll get hanging out at clubs.”

Other pros say it’s simply a bad idea for Sheen to turn social media over to an intern–or anybody, for that matter:

“Would you trust a 20-year-old as the spokesman of a company?” asked Gary Clapp, a San Diego-based social media consultant. “Plus, people want to hear Sheen’s crazy rants and get a glimpse inside his head. Put someone else on it and the feed loses its value.”

The internship was mentioned in Sheen’s most recent online video–filled with rambling, incoherent and disturbing statements–and mention of a “six figure” deal:

Maron tells Sheen that he nailed a deal with Interns.com in regards to a job post for a social media intern, “They want to Tweet at 1 o’clock today. It’s a record-breaker, it’s at least six figures.”