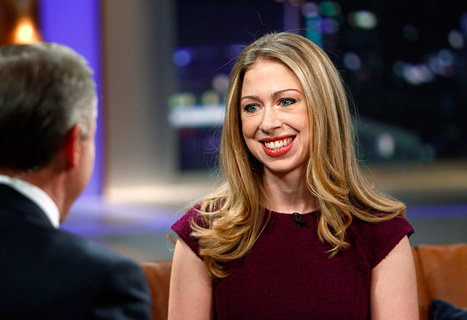 Chelsea Clinton Monday announced she and husband Marc Mezvinsky are expecting their second child, tweeting, “next summer, Charlotte is going to be a big sister! Feeling very blessed & grateful this holiday season.”

Next summer, Charlotte is going to be a big sister! Feeling very blessed & grateful this holiday season. pic.twitter.com/gpCGqcmeCq

This will be the second grandchild of President Bill Clinton and current Democratic frontrunner Hillary Clinton. Chelsea Clinton gave birth to her first daughter, Charlotte Clinton Mezvinsky, in September 2014. On Facebook, the former first daughter expanded on the announcement, writing, “being Charlotte’s parents has been the most joyous, meaningful and loving experience of our lives and we are very excited about growing our family in the new year.”

Hillary Clinton, who’s highlighted her role as a mother a grandmother on the campaign trail this election cycle, congratulated her daughter on Twitter.

Your dad and I could not be happier for you, Marc, and Charlotte. We’re so excited to meet our second grandchild! -H https://t.co/hgTr07HBlr

In addition to championing her mom on the campaign trail and writing children’s books, Chelsea Clinton also sits on the board of the Bill, Hillary & Chelsea Clinton Foundation, a non-profit founded by President Clinton in 1997. [Image via screengrab] — >> Follow Elizabeth Preza on Twitter (@lizacisms)