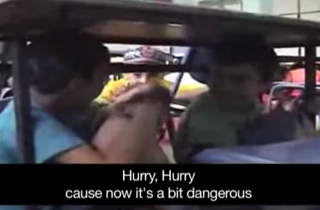 Whatever your personal feelings on the current conflict between Gaza and Israel, one thing is certain: Being a child during such a crisis is seriously frightening.

An Israeli art therapy teacher soon began noticing that her kindergarten students were being traumatized by the bomb alerts. “Children experienced real developmental regressions, some began bedwetting,” Shachar Bar told the Jewish Standard. “They were getting hysterical when the alarm sounded –- some freezing in place, unable to seek cover.”

One day, she had enough of it and wrote a children’s song to help the kids deal with the traumatic period of time between the bomb alert and the all-clear signal. According to Bar, the lyrics and the accompanying dance are actually based in various types of therapy:

“I am giving validation and legitimization to my fear and my body’s reactions,” Bar explains. “It is OK that my heart is pounding, I am even singing about it. It is OK that my body is trembling – I am afraid. Along with the words ‘boom-boom’ and ‘doom-doom,’ the movements of arms crossed and pounding on our chest borrowing from the EMDR method of treating trauma and anxieties. The movements help to break out of it and dissolve the anxiety, improving the mood.”

The song’s now widely used throughout Israeli schools after it went viral. “Once they learned it they were asking to do it again and again,” Bar told the Standard. “Suddenly they had a tool to deal with all this, that they could hold on to.”