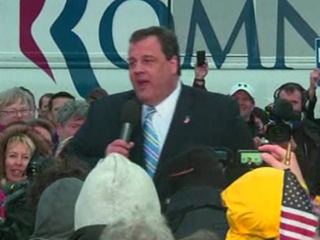 A few months ago, Saturday Night Live envisioned an aggressive NJ Gov. Chris Christie putting on his biggest show to get America to like Mitt Romney. With the Iowa caucuses less than a week away, life is now imitating art, as Christie yelled at an Iowa crowd today that if they dared not “do what you’re supposed to do on Tuesday,” he would be back. Presumably with some sort of vengeance.

How many politicians can get away with outright bullying people into doing things because he said so? Christie is part of a long tradition of rough-and-tumble New Jersey politicians who win hearts by berating them incessantly and busting the friendly politicians who steal all the state’s money. He did not modify himself at all for the Iowa audience, or for the typically mild-mannered Mitt Romney, instead letting the latter be himself while stumping for the candidate the only way he knows how: vowing to return to Iowa and let them know what he thinks if they don’t vote for his preferred candidate:

“New Jersey is watching you too. We’re watching you really closely and, listen, I want to tell you something really clearly. I’m in a good mood this morning. I’m feeling happy and upbeat. I love being with Mitt and Ann. But let me tell you, you people disappoint me on Tuesday, you don’t do what you’re supposed do to on Tuesday for Mitt Romney, I will be back. Jersey style, people, I will be back.”

The latest entry into the “Chris Christie Shouts At People” video library, via CNN, below: