CNN’s Kiran Chetry Laughs, Cries, Or Both At Soldier’s Story 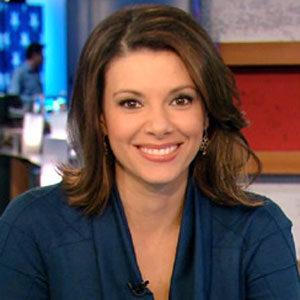 Kiran: “It’s a long story.” An untold one. Today after a Soldier’s Story report by Jason Carroll that had featured a G.I. reading a touching letter from his wife, American Morning‘s Kiran Chetry teared up and strangely laughed. As Kiran looked at Jason, then at co-anchor John Roberts, and back at Jason, she wiped her eyes, tittered dissonantly, and said, “Sorry.” Leaning in toward Kiran and grabbing her hand, Jason tenderly asked, “Are you okay?”

“Yes,” Kiran quickly. Subsequently, raising her hand, she muttered something else rendered inaudible by her continued laughter. Trying to regain her composure, Kiran looked down at her desk and covered her eyes. Then looking up at the viewer, Kiran stammered, “It’s a long story. Sorry. We’ll explain when we come [back].” Still giggling, she closed her eyes and put her hand to her mouth.

As John waited for Kiran to finish, he looked down and bit his lip. When Kiran concluded, John remarked, “Yeah. Okay.” Then, placing his hand on her shoulder, John queried, “You alright? Are you?” As John then began to read the segment out and Kiran began to well up anew, a then off-camera Jason whispered, “It’s okay.” As the block was ending, John echoed, “It’s gonna be okay.” Apparently, trying to exhibit control of her emotions anew, an off-camera Kiran exclaimed, “We’ll be right back.” Once again, John comforted Kiran, saying, “It’s gonna be alright.”

When Kiran and John returned after commercial break for the final segment of the show, a dry-eyed Kiran appeared. Perchance, conveniently forgetting her promise to her audience to explain her laughing and giggling when we come [back],” Kiran asked John about the playlist song by Rush. As they then discussed Rush’s Atlanta concert tonight and John’s possible participation in it, perhaps, they hoped that the viewers had also forgotten Kiran’s promise to explain the long story.

This post was first published on Carpe Diem blog and appears on Mediaite via an agreement with the writer, James Hogue.