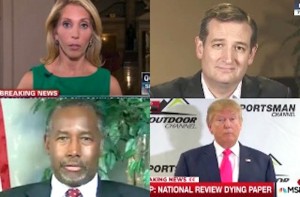 As you may have heard, we live in a finger-pointing, blame-laden, polarized world. This is especially true in cable news, where every big story seems to always result in a definitive good guy and bad guy (or girl).

There is no in-between, no shared responsibility. Because for anyone to come to that kind of conclusion would mean dropping the agendas, putting egos aside and actually being, you know… objective.

Our media class today will focus on a situation that unfolded during Iowa Caucus night, which ranks as one of the best evenings of political theater this side of the 2000 general election night/morning (Bush v. Gore). Your cast is the Ted Cruz campaign, the Ben Carson campaign, CNN Digital, CNN Broadcasting, and Donald Trump as Donald Trump.

Here’s a spoiler: Everyone just listed deserves a little blame for how this unfolded (except Trump, who just hates being left out of a good scrum but somehow still get a casting credit). There is no definitive party in the right, no definitive party in the wrong. And all of this isn’t half as insidious as it’s being portrayed to be. In the end, the speed of information, the heat of the moment and the desire to be first over being completely accurate won out here, with plenty of responsibility to go around.

One disclaimer: If you have no ability to be open-minded here, don’t bother continuing. There are those who visit this site because they like and don’t like Ted Cruz. There are those who like and don’t like CNN. There are those who don’t necessarily dislike Ben Carson, but somehow see him cut from the same cloth as Sarah Palin from a political acumen and public speaking perspective. When one works at Mediaite, one understands that this is the world we live in. But for that small, shrinking sliver of you out there who are actually lucid and enjoy reading how media is evolving (or regressing), this is just the column for you.

So let’s go through the major players here and analyze their respective roles on what transpired and continues to be debated on cable news today:

Chris Moody: Solid political reporter for CNN. Got all of his facts right on the Carson story Monday night in a series of three tweets sent out at 7:43p EST. When CNN stands by its reporting in the overwhelmingly defensive fashion it has displayed over the past 24 hours, Moody is the guy they primarily point to when declaring the network got it right. But Moody’s tweets (all at 7:43p EST) to his 30,000 followers aren’t what drove the Carson-is-out narrative.

Ben Carson will likely speak at his victory party in Iowa before caucus results are in so he can catch a flight.

Carson won't go to NH/SC, but instead will head home to Florida for some R&R. He'll be in DC Thursday for the National Prayer Breakfast.

Ben Carson's campaign tells me he plans to stay in the race beyond Iowa no matter what the results are tonight.

Dana Bash: First, a defense of Bash, who is also Grade A reporter: Live television on a night like Monday in Iowa is extremely fluid. Bash — along with Jake Tapper — look composed and the presentation is smooth thanks to experience and poise. Much tougher than it looks, because there’s a producer in their respective ears via IFB constantly feeding them information. There’s no prompter to resort to, no commercial break (at the time) to gather a thought.

So when Bash said the following — and this is verbatim — ask yourself what conclusion you would draw about Carson’s status in the race (Note: A longer transcript of Bash’s report to include her noting Carson was going to Washington, D.C. after going home to Florida was added to this column at 4:05 PM EST):

And people who have been following Ben Carson’s career know that that’s really where he got himself on the political map, attending that prayer breakfast and really giving it to President Obama at the time. He became a hero among conservatives, among evangelicals especially.

Now again, Bash doesn’t have time to write a script or craft her words perfectly. She’s relaying on what she’s being told. And this is where the whole chain of controversial events begin, because while Moody’s Tweets reach 30,000 followers + some retweets, the broadcasting side of CNN is being watched by millions at that same moment, including campaign team members who are likely monitoring all three of the cable news networks at the time.

So again, if hearing that for the first time, what conclusion would you come to? That the Carson campaign is alive and well? Or that he’s dropping out? If she meant “not right now” in terms of going to New Hampshire and South Carolina, then she had to emphasize that. Otherwise, it sounds like Carson’s not going there at all, which leads many to the conclusion that he’s calling it quits.

CNN’s defense is that Bash never specifically said Carson was dropping out, and she was correct in not connecting that dot without official confirmation from the Carson campaign. But here’s where CNN is wrong when saying they got it right, no questions asked:

Moody sent out a third tweet reporting that Carson had no plans calling it a day. But that crucial part isn’t uttered by Bash during that report at 7:43p EST. So after she stated, “…he’s not going to go to South Carolina; he’s not going to go to New Hampshire,” the third Moody tweet about Carson having no plans of leaving the race must also be relayed on to CNN’s millions of viewers watching. Because even other CNN political commentators — guys like Michael Smerconish who don’t play to either side — seemed to conclude Carson was done as many of us would have:

Carson not going to NH says @CNN? Cruz no doubt wishing he'd already packed it in, putting his IA votes in play.

So this is again where the speed and sometimes limited reach of new media (Twitter) doesn’t play well with old media (traditional cable news) during big events: The most important part- that Carson wasn’t ending his campaign – wasn’t said on the air at 7:43p EST that night. The toothpaste was already out of the tube (which is hard to take back). CNN can argue that the Moody report was correct when defending itself…it was and nobody is arguing that point. But ask yourself this question: Which report was seen by (many) more people: Bash on CNN air stating Carson wasn’t going to NH and SC? Or Moody’s Tweet to his followers stating he wasn’t ending his campaign?

Cruz campaign: They did what almost any other campaign would have in that situation: They heard Bash’s report on the air and used it to plant seeds of doubt among Carson followers. It’s not pretty, but that’s Politics 101. The only campaigns I couldn’t see not doing the same exact thing if put in a similar situation are the teams of Sanders, Kasich and yes, Carson. But again, any reasonable person listening to the Bash report — combined with Carson’s anemic poll numbers and money situation being what it is — would conclude Carson run was over. That may not have been CNN’s intent, but that’s just the way it came out.

All of that said, once the Carson campaign put out a statement they were staying in, the nonsense that was coming from Cruz surrogates like Steve King should have stopped and past tweets should have been corrected (King kinda did the following day but only after the results were in and his had won).

As Candy Carson witnessed herself, according to her husband, Cruz supporters continued to spread misinformation after likely knowing it was false.

“She spoke at one of the caucus sites and before she got there one of the Cruz people had again disseminated that information to the crowd,” Carson told Fox News. “And one of the organizers told her ‘I’m so glad you’re here, so you could set the record straight.’ And she did and we actually won in that precinct.”

Cruz himself has since apologized to Carson. Likely not because of remorse, of course, but to attempt to cut down on the number of news cycles this horrible narrative around cheating (for lack of a better word) carries (and to scoop up Carson supporters when he actually does bow out). Enter Donald Trump, who will make sure (because all media loves a food fight) the perception of Cruz’s “fraud” (his word) continues to follow him up through next Tuesday when the next votes are cast:

Based on the fraud committed by Senator Ted Cruz during the Iowa Caucus, either a new election should take place or Cruz results nullified.

Dr. Ben Carson: Note: There are actually stores in Iowa or New Hampshire you can buy new clothes in. FedEx can have them even sent to you from family members at home back in Florida overnight. For those saying Carson is getting a raw deal here, know this: Every serious campaign goes straight from Iowa to New Hampshire. And if he had to go home before going to New Hampshire, say, on Wednesday… it wouldn’t have been the end of the world. But to miss days of campaigning when your chances are already at Hail Mary status shows anyone paying attention that you’re no longer serious about winning or have a terrible strategy in doing so.

All of the said, Carson — a decent man — deserved better from the Cruz campaign and the aforementioned Steve King, as well as CNN (again, the on-air side, not Moody). The messaging and planning around Carson’s itinerary was amateur hour, horribly handled… and now he’s playing the victim? Diagnosis: A whole bowl of wrong.

We live in a political and media world that is an unfortunate combination of polarization and posturing with power the preeminent priority. In the case of CNN, Ben Carson and Donald Trump vs. Ted Cruz, there is no winner, no moral authority, no party completely in the right. Everyone involved got some aspect of this sordid scenario wrong here. The speed of social media didn’t sync with the traditional side. Accuracy and message were imperfect and the dominoes fell from there.

But let’s stop pretending one party or person deserves all the blame here. Because as any impartial witness can attest — the few remaining, anyway — there’s enough blame here to go around.