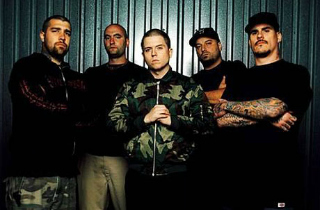 A recent CNN article by Lonnie Nasatir describes the Sikh temple shooter Wade Page‘s involvement with hate-punk bands, and included Hatebreed in a list of such bands:

At any given time, about 100 to 150 white power bands are in the United States. The bands’ own names defiantly express feelings of hate or violence: Aggravated Assault, Angry Aryans, Attack, Definite Hate, Final Solution, Force Fed Hate, Fueled by Hate, Hate Crime, Jew Slaughter and White Terror, among others.

Naturally the band, whose music has been distributed by major label Universal Music Group for many years, took issue with being lumped in with outspoken white power bands. Via Twitter on Wednesday, Hatebreed scolded CNN:

Our music brings people of all races together all over the world. @cnn @cnnopinion & @chicagoadl need to get their facts straight.

Eventually CNN took notice and updated the article with the following editor’s note: “A previous version of this commentary incorrectly included the band Hatebreed in a list of white power bands. Hatebreed is a self-described ‘hardcore metal’ band. CNN regrets the error.”

The band celebrated the change via Twitter, but lamented that Nasitir, the article’s author, hadn’t apologized directly:

If Lonnie doesnt issue an apology we’ll post his name & phone # for u guys to call & email him. Thanx everyone! Your dedication inspires us.

Huffington Post reports that Nasatir works for the Chicago chapter of the Anti-Defamation League, and the ADL did issue an apology on its Facebook account: “Hatebreed was mistakenly included in the list of white supremacist hate bands in an opinion piece for CNN,” the statement reads. “That reference has been removed from CNN and we sincerely regret that the band appeared in our piece.”

Hatebreed frontman Jamey Jasta emphasized via his own Twitter that the band has never been associated with racism:

CNN fixed that story & said they “regret the error” but it still sucks to be labeled that when we’ve NEVER been down w/ racism.

The band was nominated for a Grammy in 2005 and has had five albums make the Billboard Top 200 chart. Despite the band’s name, much of their lyrics are self-motivational, generally about rising up and overcoming obstacles.