Colin Powell On Obama: “He Has Lost Some Of The Ability To Connect”
video

Colin Powell On Obama: “He Has Lost Some Of The Ability To Connect” 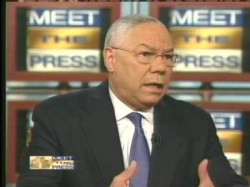 Back in 2008 Colin Powell made big headlines when he appeared on Meet the Press and stepped away from his party to endorse then-Senator Barack Obama for President calling him a “transformational figure.” (Interesting to recall that one of the things that turned him away from John McCain was Sarah Palin whom he didn’t think was “ready to be president of the United States.”) Well as in just about everything having to do with politics today, what a difference two years makes.

Powell appeared on Meet the Press this morning and this time around had a less than enthusiastic review of President Obama’s performance since taking office. Short version: “It’s the economy, stupid.” Transcript via Playbook:

“[T]he President … has to, I think, shift the way in which he has been doing things. I think the American people feel that too many programs have come down. There are so many rocks in our knapsack now that we’re having trouble carrying it. I think the president has to, like a razor blade, just go right after the single issue that is uppermost in the minds of the American people, and that’s employment. And he’s done a lot with health care, with cap-and-trade, with education. And I understand the importance of all of that. But as far as the American People are concerned, the main attack is employment. … I think he has lost some of the ability to connect that he had during the campaign. And it is not just me picking on the President. It’s reflected in the polling.”

Perhaps this is Powell’s version of “Obama needs some witchiness!” Still it can’t be pleasant for Obama to hear one of the more respected voice, on both the right and the left, coming to the popular conclusion that he is disconnected from voters. Though I do love that Powell feels it necessary to point out that he is not alone in “picking on the President.” Indeed. Video below.