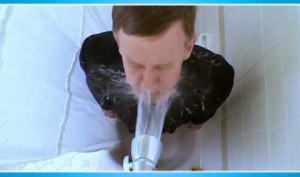 If you’re like us, you’re probably sick of negative campaign ads with their booming voices, scary red text, and black and white faces frozen at the least attractive moment possible. Fortunately Colorado’s Democratic candidate for Governor, John Hickenlooper, is here to show us there’s an alternative. That alternative, it just so happens, is watching a middle-aged man take a shower. Don’t worry, it’s much better than it sounds.

The ad is, in fact, downright charming. In it, Hickenlooper muses that he must not be “a very good politician because [he] can’t stand negative ads.” He then claims that every time he sees one he feels like he needs to take a shower and, unfortunately, he sees them a lot. This is, of course, all played over footage of Hickenlooper, fully dressed, stepping in and out of the shower. The whole thing is kind of adorable, like watching Mr. Smith Goes to Washington right after a screening of In the Loop.

Still though, Chris Cillizza over at The Fix points out that one of the only reasons Hickenlooper was able to stick so closely to the high road was that he doesn’t have much of a chance of losing:

“While the ad is creative and effective, there are a few mitigating factors that suggest it may be tough for other ‘outsider’ candidates to copy it in their own races.

First and most importantly, the Colorado Republican Party has imploded in recent weeks.
Former Rep. Scott McInnis, long touted as the party’s strongest nominee, watched his political stock plummet in the wake of plagiarism charges. That left room for little known Dan Maes, himself struggling under campaign finance fine, to oust McInnis in the Aug. 10 primary.

With Maes as the nominee, it’s hard to imagine the Republican Governors Association spending any money on the race and it’s equally difficult to see Maes raising the sort of money on his own to compete with Hickenlooper.

That financial mismatch means that the race isn’t much of a race and Hickenlooper’s pledge of no negative ads is somewhat penalty-free. He gets the benefit of looking like a different sort of politician without running the risk of losing the race to a better funded — and better known — Republican who goes negative.”

Aw man, so Hickenlooper might not just be a really nice guy? Oh well. It’s still a pretty darn entertaining ad, even if it does give us concern that Hickenlooper may, in fact, be a never nude. Remember, there are dozens of them.