Conservatives Mock Jeff Flake For Donating to Doug Jones Campaign: This is a ‘Bad Idea’ 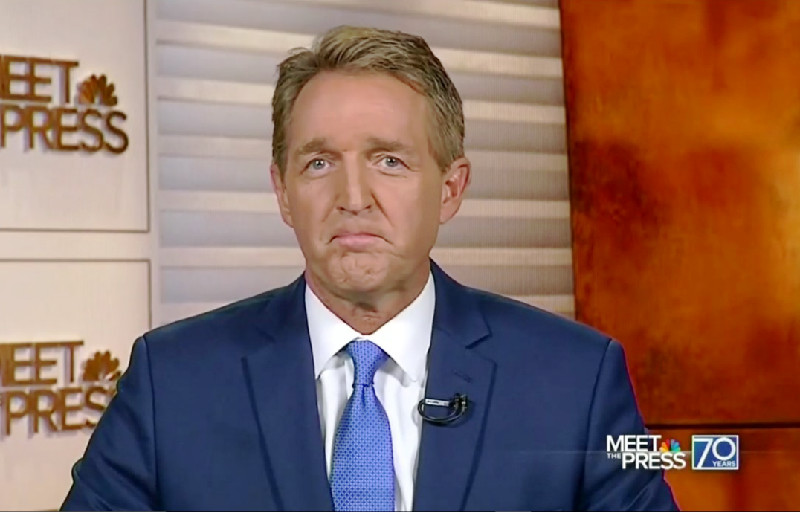 The outgoing senator has been outspoken about his disdain for GOP senate candidate Roy Moore, whose campaign has been dogged with sexual misconduct and child molestation allegations. Last month, he had said he would support a Democrat over the controversial judge. And it appears he truly put his money where his mouth is.

While Flake was applauded by the left for making such a financial contribution, conservatives blasted the senator, not necessarily for helping Jones, but for ultimately helping Moore.

How does Jeff Flake attempt to remain relevant? He donates $100 to the late-term abortion supporting Democrat in the #ALSen race.

Roy Moore campaign couldn’t have dreamed of a better late boost for their fundraising. A measly $100 for Jones from a GOP establishment figure: priceless. https://t.co/16wv3uIvao

If Flake really wanted to help Doug Jones, he wouldn’t have pulled that stunt today. https://t.co/tA7TFRSOGX

Jeff Flake is the worst https://t.co/N8ZM67Zf1N

A step too far https://t.co/IprTFQbZAu

Live look at Salon Conservative HQ where we are prepping to unveil the Jeff Flake statue. pic.twitter.com/32AZIajgoY

Jeff Flake and Mitt Romney’s criticism of @MooreSenate will help Moore get elected… Not to mention Flake’s $100 campaign contribution to “Doug Jones for US Senate.”

Even one of Flake’s Republican colleagues, Nebraska Senator Ben Sasse, thought it was a “bad idea.”

This donation is a bad idea.
It’s possible to be against BOTH partial birth abortion AND child molestation. Happily, most Americans are. https://t.co/BjVH2gL69F

And it appears Roy Moore is attempting to fundraising off of Flake’s donations to Jones.

I’m asking for 100 grassroots conservatives to step up and reject the DC Establishment by donating HERE: https://t.co/ig9d3KOKn4 https://t.co/jFLUpwElqx