Curious Daily Caller Writer Wants To Know: ‘What Are Women For?’

Curious Daily Caller Writer Wants To Know: ‘What Are Women For?’ 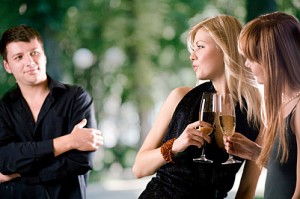 The Daily Caller‘s James Poulos is a man searching for answers to the most difficult of life’s questions, namely: “what are women for?”

In fact, Poulos calls this riddle wrapped in an enigma “the significant battle” of our time, as “none of our culture warriors are anywhere close to answering that question.”

RELATED: Condescending White Forbes Writer Pens ‘If I Was A Poor Black Kid’

If you’re like Poulos, and view women in much the same way you view that handful of pegs and screws that’s left over after you build a piece of Ikea furniture, or that thing at the back of your throat that looks like a punching bag, do read on.:

The prevailing answer is the non-answer, a Newt-worthy challenge to the premise that insists the real purpose of women is nothing in particular.

Such an answer may or may not be a landmark in the progress of the human race, but it is anathema to most conservatives of any political party, and for that reason conservative folkways, prejudices, and ideals are once again on trial.

Poulos took some time exploring his existentialist question, which encompassed a comprehensive 1,000-words.

His point appears to be that female liberals are essentially divided into two camps, women who want to have babies (the suburban set) and women who don’t (single urbanites?) He even threw in a dig at LGBT people who had the audacity to question Sex and the City‘s Cynthia Nixon’s assertion that being gay is a choice. He labelled them “the left’s cultural policemen of ‘aiding and abetting bigots and bashers.'”

The purpose of lifting the left’s Potemkin skirts is not to score tits for tats.

On first read, one might think ‘he must be trolling, or this must be an elaborate spoof by The Onion…an outtake from the Sh*t Nobody Says viral video?’ Nope, it appears to be the real deal.

To top it off, when Poulos first posted the article, he didn’t even direct it to any, er, women: 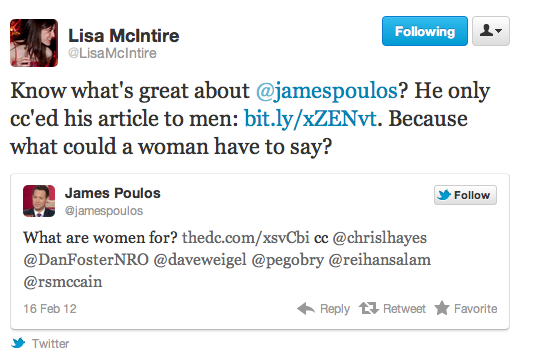 Read the full essay here, if you too, want to know what women really are for.