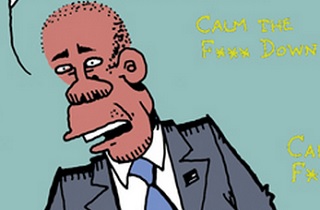 One of the great things about conservative media watchdog Newsbusters is their utter dedication to craft, scouring every last inch of the media world for things to be upset about. This weekend, the site’s Tim Graham dug out a feud between pioneering liberal blog Daily Kos and political cartoonist Ted Rall over Rall’s “ape-like” depictions of President Obama. Although Graham tries to remain a neutral spectator to the fight, his minimal commentary actually cuts right to the heart of the matter, and it’s not pretty for Rall.

Rall explains that although Daily Kos pays for cartoons from cartoonists who are not Ted Rall, he decided to publish his work on the site for free in order to “access readers, many of whom would enjoy my work if they saw it.”

Things went well for a few weeks, until Rall got the following message from the site’s administrator:

Your depiction of Barack Obama as ape-like is intolerable. Being critical of Obama, even ferociously so, is not the problem. Through British and American history, blacks have been subject to racist depictions of themselves as monkeys and apes. No excuse is acceptable for replicating that history, no matter what your intent. If it happens again, your posting privileges will be suspended.

Rall complains about being “censored” by Daily Kos, a claim that’s only slightly undercut by the fact that his complaint was also published at Daily Kos (although Rall’s claim that “I drove traffic to them” is missing from the DKos version), and the fact that the offending cartoon remains posted at Daily Kos. His defense is, essentially, that none of the other editors he cartoons for have complained, not even the black ones, and that everyone knows he’s not racist.

He also explains that he’s not about to follow the site’s guidance:

I might consider altering the way I draw a political figure for a paying client. A very high-paying client. Someone who employed me full-time.

I’m sure not going to alter my drawing style for $0.00 money.

Obviously, this is no biggie. Nothing gained, nothing lost. Given the reflexive pro-Obama/pro-DNC politics of the blog and its owner, it was probably inevitable that they’d do this. It was crafty of them to choose the Thanksgiving holiday weekend to ban me. Fewer people will be around to notice or care.

That’s not entirely true, though. Someone was around to notice and care. Guided by a quickie Jim Romanesko item, Graham penned an item in which he tried to sit back and munch popcorn while he described the libs tearing into each other. But in his four lines of commentary, he rendered this clear judgment:

The caricature doesn’t really look like Obama, certainly not the ape-like nose.

Rall’s problem is that he, like a lot of white people, seems to think that you have to be a “racist” in order to do something that is authentically racially offensive. It’s quite possible that Rall is just crap at drawing people (although he seems to have absolutely nailed Hitler), or it’s possible that something in his subconscious is affecting the way he draws the President, like existing in a culture that bombards its citizens with negative depictions of black people. The distinction, Rall must understand, makes little difference to the outcome. If people tell you that you’re doing something that’s offensive to them, the test becomes how much you care about that.

For example, let’s say Ted Rall has an affinity for the idiom “call a spade a spade,” and he goes to a cocktail party, where he keeps saying “call a spade a SPADE” within earshot of black guests. He may well just have a genuinely limited metaphoric menu and difficulty modulating the volume of his voice, but when someone pulls him aside and says “You keep saying ‘SPADE’ really loud around black people, and it’s making you look like a racist asshole,” Ted can either go “Whoops! I’ll go with ‘I call ’em like I see ’em,” or he can say “Everyone knows I’m not a racist. SPADE! SPADE! SPADE!”

This is the tension at the heart of conservative antipathy toward what they call “political correctness,” that any concession to the feelings of others is an admission of malice. It’s okay not to know something, but it’s not okay to refuse to know it after you’ve been told.