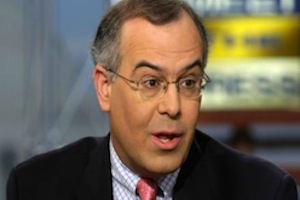 Conservative columnist for The New York Times David Brooks takes on presumably his own party in a hyperventilating tirade blaming the Republican party for playing politics with the budget crisis. Maybe Brooks is legitimately worried that if America comes close to possibly defaulting on its debt, the consequences would be so grave that Republicans shouldn’t even use it as leverage in their negotiations. Yet if that’s the case, why aren’t Democrats and particularly President Obama, even more deserving of his scorn for allowing such a critical issue to remain unresolved right up until the deadline?

Brooks summarizes the dilemma from his vantage point:

“If the Republican Party were a normal party, it would take advantage of this amazing moment. It is being offered the deal of the century: trillions of dollars in spending cuts in exchange for a few hundred million dollars of revenue increases. A normal Republican Party would seize the opportunity to put a long-term limit on the growth of government. . . . The Republican Party may no longer be a normal party. Over the past few years, it has been infected by a faction that is more of a psychological protest than a practical, governing alternative.”

Brooks goes on to belittle members of the “movement” (hint: Tea Party) for not believing in compromise, logic, economics or the opinions of experts, and for not having a sense of moral decency since they don’t take seriously a pledge to pay back debts. As a result, if no compromise is reached, Brooks argues that everyone will be convinced, like he is, that Republicans are solely to blame:

What Brooks completely ignores is the possibility that Republicans are not stubbornly refusing to compromise just to poke Obama in the eye or solely in order to crater the economy so as to hurt Obama’s re-election efforts. Instead, principled Republicans are doing exactly what they were elected to do in 2010 and are refusing to go along with any plan that they feel would harm the economy even further. Harassing the private sector and the wealthy with additional revenue requests from the federal government is a policy many truly believe would lead to national economic deterioration. Whether that’s a legitimate argument or not, Brooks is entirely free to dispute. Yet for Brooks to dismiss as “fanaticism” the Republicans who refuse to back down from a no tax increase promise made to their constituents and Tea Party supporters, well that seems rather “fanatical” of Brooks.