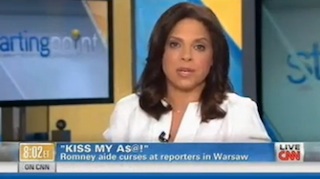 A few months ago, in the midst of a number of racially-tinged ongoing news stories, I wrote a piece asking readers for their opinions on whether newscasters should censor themselves when quoting racists, whether or not they should say aloud horrible slurs on air. There were a number of well thought out opinions on both sides and, while I personally believed that, as I put it, “a reporter’s job is to present facts and, if that fact happens to be hate, that hate should be presented without any filter or sugarcoating.” However, I structured the column as question because I could totally see both sides of the argument.

You know what I can’t see both sides of? Deciding to bleep the word “ass” when a top aide in a presidential campaign tells reporters to kiss his ass.

RELATED: Romney Aide Explodes At Media In Poland: ‘Kiss My A**’

Did you all hear the big news? No. No you didn’t. You may have read it, but you certainly didn’t hear the big news that Mitt Romney’s travelling press secretary, Rick Gorka, told reporters to kiss his ass because the entire thing was bleeped on TV today. I couldn’t even hear the word “kiss” in the clip CNN played. For all I know, Gorka said “Kiss my cheek, I love you all!” or ” Kiss me, I’m Irish!” or “Obama 2012!” I have no idea, and that’s just silly.

Mere weeks after news organizations showed graphic video of Muammar Gaddafi’s corpse being manipulated like the world’s least fun Muppet, and CNN can’t say the word “ass,” a word that you can say in PG-rated movies.

I’m being a little facetious. Obviously many news organizations censored the Gaddafi video. However, I don’t think they should. Warn people before playing it, obviously, but still give them the facts as they are without being watered down. Perhaps I hold an antiquated notion in our condescending opinion show world, but I thought that that was what the news was for. Not being able to say “ass” uncensored is just the most absurd extreme of this sugarcoating.

Oh, wait. No it isn’t. The most absurd extreme has been the coverage of the band Pussy Riot in Russia. While many news outlets have covered the story like any other (and, yes, I have gotten a ton of enjoyment in listening to stuffy BBC reporters say the word “pussy” over and over again), others have quibbled about how to document what is a very real news story. I hope those supposed news people feel the appropriate amount of irony when they have their behind the scenes discussions on the topic. Here are three women fighting for their freedom to criticize an oppressive regime while, over here in Freedomtown, USA, journalists are afraid to say their band name.

Look, I understand that you’re protecting the sensibilities of your viewers but, if I can be so bold, fuck that. You’re already breathlessly reporting the details of the umpteenth serial rape/murder. After you tell describe to your viewers in detail just how much blood and semen was found at the crime scene, please treat them like adults and say the word “ass” uncensored.

It’s a hopeless fight, I’m sure, but news media has to grow up if they’re going to cover a world that’s both grown up and immature at the same time. I had to check upstairs to even get “ass” in this headline and I’m sure at least 20 Twitter users will complain about it without reading this column. But the fact remains, if we want to cover facts, we have to accept that facts rarely respect FCC guidelines.

Below, watch a Fox News segment discussing Pussy Riot without ever letting their viewers’ know who the hell they’re talking about. The key word here, in every possible way, is “pussy.”