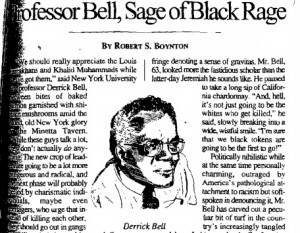 The life and legacy of the late Professor Derrick Bell has come under vicious assault by conservatives hell-bent on salvaging Breitbart.com’s Barack Obama “bombshell,” which turned out to be a toy gun that shoots out a flag that says “Bang! Black Guys Hugging!”

One of the lies being told about Prof. Bell is that he “loved,” “admired,” and “praised” Nation of Islam leader Rev. Louis Farrakhan and former New Black Panther Party head Khalid Muhammad. Their deceit is so egregious, though, that this ought to be the last such lie I need to debunk. The takeaway here is that these people are absolutely not to be trusted.

The conservative Breitbart.com family of Big sites have lately devoted themselves to smearing the late Professor Derrick Bell as a “radical” who committed the unspeakable outrage of hugging our future president, releasing the “incriminating” footage of then-Harvard Law Review President Barack Obama introducing Prof. Bell at a pro-diversity protest. The supposedly “hidden” tape (which has been available online since 2008, and even accumulated over a million YouTube hits before Election Day, 2008) is actually a plus for the President, as the average American would probably come away from a viewing of the tape with a more favorable opinion of President Obama.

Although the “Hug Scandal” has gotten very little traction in the mainstream media, the smears against Prof. Bell have mounted, and have been fought against by those who knew him. They center on dishonest, context-free readings of the late Professor Bell’s Critical Race Theory, and remarks he made surrounding it.

This latest smear relies on an old New York Observer article that’s not available online, a fact that conservative websites have taken full advantage of. Let’s peel this onion from the outside in. At PJ Media, J. Christian Adams (the “whistleblower” in the New Black Panther case) gives the most dishonest read:

Yeah, that is pretty shocking! We should “appreciate” extremists like these? For shame, Prof. Bell! What do you have to say for yourself? Oh, right, nothing, because you’re dead. If only you had explained yourself a little better at the time.

Luckily, other blogs reported a little bit more of what the Professor said, while still smearing him as a “fervent admirer” who “praised” Khalid Muhammad and Rev. Farrakhan. I suppose we should appreciate these blogs for not being quite as dishonest as Adams. Most blogs report the quote the way John Podhoretz did, since he seems to be the only one of them to have seen the actual article. Noting that the full interview isn’t available online, Here’s what Podhoretz said:

The very same interview began as follows: “We should really appreciate the Louis Farrakhans and the Khalid Muhammads while we’ve got them.” Khalid Muhammad was Farrakhan’s right hand, who made a name for himself referring to Jews as, among many other things, “bloodsuckers” whose “father was the devil.”  As for Farrakhan, if you need a refresher course in his vileness, look here.

Why exactly were we supposed to appreciate them? Quoth Bell: “While these guys talk a lot, they don’t do anything. The new crop of leaders are going to be a lot more dangerous and radical, and the next phase will probably be led by charismatic individuals, maybe teenagers, who urge that instead of killing each other, they should go out in gangs and kill a whole lot of white people.”

Now, even based on the quotes Podhoretz lets out, no reasonable person would conclude that this was “praise” or “admiration,” or anything of the sort. If I said I learned a new appreciation for heartburn when I had my heart attack, that would not be “praise” for heartburn. Prof. Bell was clearly employing irony.

Podhoretz, though, has a secret weapon against that undeniable fact:

Note how he seemed to relish this prospect even as he tut-tutted it.

That’s a hell of an inference to draw from a printed page. He ought to be working at a Nathan’s with a relish detector like that.

If only the late Prof. Bell had gone on to say something that made clear he did not relish the thought of a murderous cadre of Khalid Muhammad’s successors. If only someone would contact The New York Observer to obtain a .pdf scan of that October 10, 1994 interview, in which Professor Bell, in the very next sentence, said this (while sipping Chardonnay, I’m not kidding):

“And hell, it’s not just going to be the whites who get killed,” he said, slowly breaking into a wide, wistful smile. “I’m sure that we black tokens are going to be the first to go!”

So, Professor Derrick Bell, Podhoretz claims, “relished” the thought of being slaughtered by militant black people.

Podhoretz also omits key context from another portion of that interview:

I was furious. Even if everything he said was true, it was inexcusable not to mention what might have motivated blacks to feel this way, and to fail to talk about all the Jewish neoconservative racists who are undermining blacks in every way they can.

Bell went on to say, “Now, that wouldn’t excuse anti-Semitism, which is awful, but it would at least provide a context for this anger…”

It’s a touchy, controversial subject, to be sure, but Podhoretz fails to mention that Prof. Bell was denouncing black self-criticism writ large, and not trying to mitigate Antisemitism. His larger point was made clear in the sentence that Podhoretz cuts off with an ellipsis: “but it would at least provide a context for this anger and make it less likely that Skip’s piece is used by whites to justify cutting back spending on social programs.”

There are lots of reasons to be upset about things that Prof. Bell said. His chosen subject matter was controversial, and his theory was, necessarily, also controversial. That’s what a theory is. However, if you can’t even be honest about what he actually said, you give up your place in the conversation.