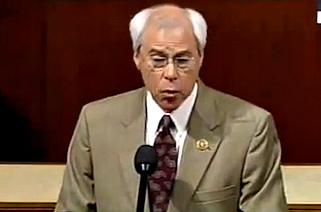 Georgia Democrat John Barrow took to the floor of the House of Representatives on Friday afternoon to critique the price of President Obama’s forthcoming trip to Africa, as its putative price tag is roughly the equivalent of the sequester-induced spending cuts in the state of Georgia.

“Very soon thousands of folks in my district in Georgia, and even more across the state, will be furloughed as a result of the budget sequester,” Barrow said. “Studies have shown that the sequester will cost the Georgia economy approximately $107 million. Meanwhile, reports circulated this week that President Obama’s upcoming trip to Africa will cost the taxpayers nearly $100 million.” (Note: this is actually the highest end of the estimate, which projected a cost ranging from $60-$100 million.)

“Mr. Speaker, no one here questions the need for security for our Commander-in-Chief,” Barrow continued. “But we do question the need for such expensive trips when so many folks across the country are being forced to cut back because Congress can’t get its act together.”

“A trip of this magnitude isn’t unusual, but these are hard times,” Barrow said. “One hundred million dollars could be better used to keep folks on the job. I urge the President, and everyone at the federal level, to lead by example, and not take the fact that Congress can’t get its act together and rub that in the faces of hard working Americans.”

This exact question was put to White House Chief of Staff Denis McDonough by Bob Schieffer last Sunday, though McDonough successfully avoided answering it. And to be fair, Barrow seems to include Congress in his critique of the sequester, not just Obama for his continued spending throughout its duration.

Watch the speech below, via C-SPAN: