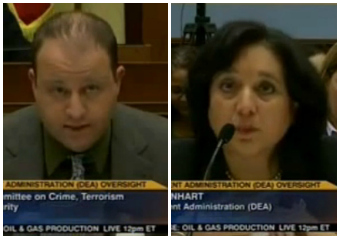 Congressman Jared Polis (D-CO) made drug reformers proud on Wednesday when he went after Drug Enforcement Administration official Michele Leonhart during a hearing on DEA oversight. Polis refused to allow Leonhart to get away with half-answering questions about the relative health impact of marijuana versus other drugs.

Rep. Polis is an outspoken advocate of marijuana legalization (last year, he proposed a deficit-reduction plan that involved legalizing and taxing weed). During the hearing, he sought to make Leonhart concede that other Schedule I narcotics are much worse than marijuana — a point drug reformers often use to make the case that pot shouldn’t be classified with drugs like heroin and meth.

“Is crack worse for a person than marijuana?” Polis asked Leonhart.

“I believe all illegal drugs are bad,” she meekly replied.

“Is methamphetamine worse for somebody’s health than marijuana?”

As she began to repeat her same answer, Polis interrupted her, asking, “Is heroin worse for someone’s health than marijuana?”

“Again. All drugs…” she began to answer, before a frustrated Polis cut her off.

“Yes, no, or I don’t know,” he said. “If you don’t know, you can look this up. You should know this as the chief administrator for the Drug Enforcement Agency. I’m asking you a very straightforward question: Is heroin worse for someone’s health than marijuana?”

“All illegal drugs are bad,” she replied.

“Does this mean you don’t know?” Polis interrupted.

Clearly she doesn’t. Or she simply refuses to acknowledge the facts. Plenty of studies show that drugs like heroin, methamphetamine, and cocaine are much more addictive and harmful than marijuana. Heck, the same studies also show that alcohol and nicotine are more addictive and harmful than marijuana. Our own government even recognizes that nicotine is potentially as addictive as heroin and cocaine.

Despite the well-known research, Leonhart accused Polis of asking a “subjective” question.

“No, this is objective. Just looking at the science,” Polis shot back. “This is your area of expertise. I’m just a layperson but I’ve read some of the studies and I’m aware of it. I’m just asking you as an expert in the subject area: is heroin worse for someone’s health than marijuana?”

He pressed her once more: “So heroin is more addictive than marijuana?”

Leonhart’s non-answer: “Congress determined that marijuana is a controlled substance. And DEA’s tasked with enforcing — ”

“Again,” he interrupted, “in pursuit of your ‘top priority,’ are you willing to look at medical marijuana as a way of reducing abuse of prescription drugs?”

Leonhart’s response: “We will look at any options for reducing drug addiction.”

Check out Leonhart’s inability to answer a question below, via C-SPAN: