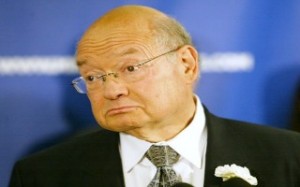 Democratic Rep. Gary Ackerman, a retiring Congressman that has represented Queens, New York since 1983, told Bloomberg in an interview that he believes “the people have gotten dumber.”

RELATED: Michelle Malkin: ‘Obama Is At The Center’ Of The Fast And Furious Scandal

“Congressman Ackerman, you’ve been here 30 years. Can you define comity as it existed when you arrived versus how it exists now?,” asked Bloomberg in an interview with outgoing congressional representatives.

Ackerman’s response was to challenge the questioner’s premise and to blame the voting public for the lack of amity in Congress today as opposed to when he arrived in the lower chamber.

“Society has changed. The public is to blame as well,” said Ackerman. “I think the people have gotten dumber.”

“Your premise is that comity exists now. It may not be entirely accurate. It used to be you had real friends on the other side of the aisle. It’s not like that anymore. Society has changed. The public is to blame as well. I think the people have gotten dumber. I don’t know that I would’ve said that out loud pre-my announcement that I was going to be leaving. [Laughter]

But I think that’s true. I mean everything has changed. The media has changed. We now give broadcast licenses to philosophies instead of people. People get confused and think there is no difference between news and entertainment. People who project themselves as journalists on television don’t know the first thing about journalism. They are just there stirring up a hockey game.”