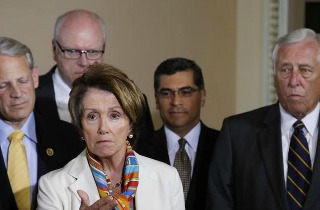 Almost as soon as House Speaker John Boehner (R-OH) announced plans to form a special committee set to investigate the 2012 attack on an American mission in Benghazi, pundits and lawmakers alike recommended Democrats boycott what they considered a partisan fishing expedition. Rep. Adam Schiff (D-CA), a member of the House intelligence committee, called the special investigation a “colossal waste of time” in an appearance on Fox News Sunday.

On Tuesday, however, Democrats began to signal their willingness to consider participating in that investigation. Politico reported on Tuesday afternoon that the select committee, chaired by Rep. Trey Gowdy (R-SC), would consist of seven Republicans and five Democrats.

Democratic minority leader Nancy Pelosi (D-CA) said that there should be an equal number of Democrats and Republicans on the committee. She had not yet committed to appointing Democratic members to the investigation, but sources close to her told Politico reporters she would consider it after seeing the “details of the resolution” that establishes the committee.

“The panel should be equally divided between Democrats and Republicans as is done on the House Ethics Committee,” Pelosi said Tuesday. “It should require that witnesses are called and interviewed, subpoenas are issued, and information is shared on a bipartisan basis. Only then could it be fair.”