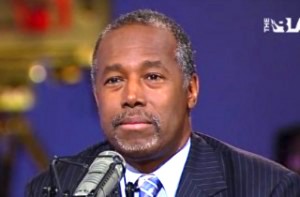 Politico has a groundbreaking story this Friday afternoon that’s almost certain to shake up the 2016 Republican presidential race: “Ben Carson admits fabricating West Point scholarship.” The story comes after CNN ran a separate story Thursday finding that couldn’t find any classmates who could corroborate his story that he had once tried to stab and bludgeon friends and classmates.

Here’s the lede to the Politico story: “Ben Carson’s campaign on Friday admitted, in a response to an inquiry from POLITICO, that a central point in his inspirational personal story was fabricated: his application and acceptance into the U.S. Military Academy at West Point.” Note that, like the headline, it claims the Carson campaign admitted the candidate “fabricated” the story.

The only problem is, if Politico’s own reporting is to be believed, the Carson campaign doesn’t seem to have admitted that at all.

Here’s their statement, as republished by Politico:

“Dr. Carson was the top ROTC student in the City of Detroit. In that role he was invited to meet General Westmoreland. He believes it was at a banquet. He can’t remember with specificity their brief conversation but it centered around Dr. Carson’s performance as ROTC City Executive Officer.

He was introduced to folks from West Point by his ROTC Supervisors. They told him they could help him get an appointment based on his grades and performance in ROTC. He considered it but in the end did not seek admission.”

What it seems to me is that the Carson campaign is readily admitting that the account Carson published in his autobiography (in which he claims to have been “offered a full scholarship”) was inaccurate. That alone is troubling, and Politico was right to pursue the story.

But at no point does the campaign admit that Carson “fabricated” anything. There’s a huge, huge difference between admitting you got something wrong and admitting that you made something up entirely. Carson’s appeared to have admitted to one, but not the other. That’s why when Mediaite covered the story, we went with a more neutral headline: Ben Carson Admits He Never Actually Received Scholarship From West Point.

But Politico overreached and chose a headline and lede that said that Carson admitted to lying. You’re entirely at liberty to think that it was possible, probable, or even almost certainly true that Carson lied about the West Point scholarship. You’re entirely at liberty to believe that he was simply confused or mistaken. But to say in a straight news story that Carson admitted to “fabricating” the story is editorializing and inserting opinions into what ought to be a straight recitation of the facts.

Also, the lede to the piece is entirely incorrect on one count: at no point in Gifted Hands or afterwards did Carson ever claim to have made an “application” to West Point. Here’s what he actually says in the book:

More exciting to me, General William Westmoreland (very prominent in the Viet Nam war) attended with an impressive entourage. Afterward, Sgt. Hunt introduced me to General Westmoreland, and I had dinner with him and the Congressional Medal winners. Later I was offered a full scholarship to West Point.

No mention of him applying to West Point, just of them offered him a scholarship that he turned down. In fact, Carson says later in the chapter that Yale was the only school he applied to. And three months ago, long before Politico presumably began poking around, Carson again said that he never applied to West Point.

I was the highest student ROTC member in Detroit and was thrilled to get an offer from West Point. But I knew medicine is what I wanted to do. So I applied to only one school. (it was all the money I had). I applied to Yale and thank God they accepted me.

Carson has been consistent in claiming (erroneously) that West Point offered him a scholarship and claiming (correctly) that he never applied. So to state as fact in the lede that Carson “fabricated… his admission” to West Point is unambiguously false. Right from the first sentence, Politico’s piece was inaccurate.

But he was definitely wrong about being offered a scholarship, and his campaign admits as much. Some would argue that if you admit being wrong about something as eventful as that, it stands to reason that it was a knowing falsehood. Maybe Politico can’t be blamed for taking a journalistic shortcut.

Now I happen to think that, taken in combination with the CNN story, Carson probably did intentionally exaggerate parts of his biography. But it’s not terribly difficult to imagine a scenario, based on the facts we know, how Carson could have garbled the facts about an encounter that happened when he was 17 years-old.

Teenager Carson is talking to a bunch of West Point officers and/or students at a military banquet. He tells them (truthfully) that that both Yale and Harvard have visited and actively recruited him, that he has the top grades in his class, and that he is the top-ranked ROTC officer in the Detroit-area. They respond (truthfully) by saying he is effectively guaranteed entrance into West Post if he applies. To try to encourage him, they note (again, truthfully) that all of his expenses would be 100% paid for.

Is really so hard to believe that a lifetime later Carson would misremember that as him being offered a scholarship?

Let me put it this way; is it more believable that thirty years later Ben Carson would misremember receiving a West Point offer, or that eight years later Hillary Clinton would misremember coming under sniper fire in Bosnia? And yet, I can guarantee you that the number of mainstream media outlets who stated outright that Hillary “fabricated” that story was zero.

That’s not a complaint; the media did the right thing in that instance. You can think that obviously Ben Carson is lying or obviously Hillary Clinton was. But it’s not the media’s place to make that decision for the voters. Carson will deservedly drop in the polls after this story. But what he doesn’t deserve is to have the media putting words in his mouth.

I’ve emailed the author of the Politico piece to ask him to respond to my concerns, but he did not respond by press time. I’ll update this column if he does.