Dispatches From Fox Nation: An Army Of Snitches

Dispatches From Fox Nation: An Army Of Snitches 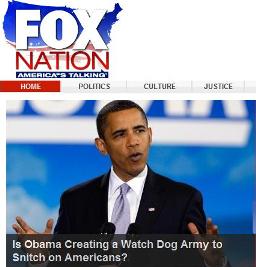 Did you know President Barack Obama is assembling a canine army to travel America and snitch on ordinary hard-working citizens? Or something.

On the front page of The Fox Nation, we’re asked the question: “Is Obama Creating a Watch Dog Army to Snitch on Americans?” Let’s see what readers are treated to when they click through.

The text of the story reads:

What concern is it to the president or his administration if private citizens have disagreements, discussions, and dissections of his proposed take over of the health care industry?

The link is to a Foxnews.com column by conservative radio host Kevin McCullough about a part of a blog entry from the White House.

There is a lot of disinformation about health insurance reform out there, spanning from control of personal finances to end of life care. These rumors often travel just below the surface via chain e-mails or through casual conversation. Since we can’t keep track of all of them here at the White House, we’re asking for your help. If you get an e-mail or see something on the Web about health insurance reform that seems fishy, send it to [email protected]

McCullough thinks this signals some Big Brother, unconstitutional evil plot. And not surprisingly, so do most of the commenters of Fox’s Nation. Here’s one from Shewiff Bart: “Hmmm sound’s like a good start to the Rahm division of his ‘civilian force’ with more firepower than our military. 3rd world thuggery is now solidly in place and resistance to FedGov is futile.”

Of course, the policy stated in the WH blog entry sounds nothing like this, but that’s not stopping the Fox Nation from raising the question. Hey America, stop snitching!

Do you see something of interest at The Fox Nation? Email it to [email protected] (and check out all the past “Dispatches” here)…