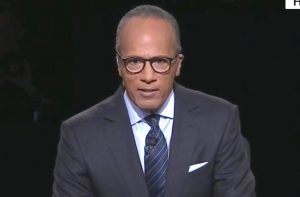 It’s often remarked that you can immediately tell who lost a presidential debate by who immediately starts complaining about the moderators. Monday night was no different, as Donald Trump immediately criticized Lester Holt‘s moderation, before praising it, before criticizing it again the following morning. Given the overwhelmingly negative reaction to Trump’s debate performance, his willingness to blame everyone but himself (including, laughably, a “defective mic”) was certainly predictable.

That said, is there any validity to his claim that Holt’s moderation was one-sided in favor of Hillary Clinton? Let me begin with the usual disclaimer that I do not support Trump and was rather pleased to watch him flounder last night. But much as it pains me to say so, he’s basically right: Holt’s choice of questions was demonstrably one-sided against Trump.

Holt asked eight generic questions of both candidates, the sort that make up the meat and potatoes of most presidential debates. No complaints here; there was a good mix of questions that would put Trump and Clinton both in uncomfortable territory at different points. (Note, all questions have been paraphrased for space reasons)

But there was also five questions that were asked specifically of certain candidates. All but one were to Trump, and all of those were negative questions about varying Trump controversies.

Throughout the entire debate, there was exactly one question that was directed only towards Clinton:

I think it’s debatable (heh) whether or not this question is neutral or negative. But I’ll be nice and give Holt some credit here; it put Clinton in the uncomfortable position of either having to criticize America’s police or alienating black supporters. But it certainly wasn’t nearly as bad as the questions asked of Trump, which implicitly questioned him on whether he was a sexist, a racist, and a liar.

More importantly, it paled in comparison to the sort of negative questions that could have been asked of Clinton. The Clinton Foundation, her private email server, the “deplorables” remark, her handling of Libya and Benghazi, her role in the Russian reset; none of the scandals or gaffes that actually damage public perceptions of her. The closest we got was when Trump brought up Clinton’s emails, and Holt asked her if she wanted to respond.

Even we give Holt a point for asking Clinton a single difficult question, that fact remains that he asked Trump four times as many negative questions. I don’t care how much you dislike Trump, that shouldn’t be happening in a supposedly balanced debate. I can only imagine how the Clinton team would be reacting if those numbers were reversed.

In addition, at certain times in the debate, Holt interrupted to fact-check the candidates. Every single one of these fact-checks were directed toward Trump. Certainly Trump did himself no favors in that department by repeating obvious whoppers, but it’s not as though Clinton wasn’t making bizarre, highly inaccurate and just plain false claims herself. (In total, Holt interrupted Trump 50% more often than he did Clinton, but I suspect much of that can be explained by Trump’s tendency to speak out of turn and avoid answering questions).

If you’ll allow me to speculate, I believe that Holt simply overcompensated after the blowback Matt Lauer received for letting Trump lie about his support for the Iraq War. I would also speculate that for a newsman of his stature, it may have been somewhat embarrassing for the entire media to be widely discussing the fact that he was a registered Republican. Holt really, really didn’t want to be perceived as too critical of Clinton or overly deferential to Trump, and simply swung too far in the other direction.

In the end, it was Donald Trump who sunk Donald Trump. After all, if the moderators fail to bring up a damaging scandal about your opponent, it falls on you to bring it up yourself. At many points, Trump’s failure to do so was baffling: how did he not turn a question on cybersecurity into an attack on Clinton keeping classified info on an unsecured email server? But that doesn’t change the fact that the moderation may have been the most one-sided in debate history.