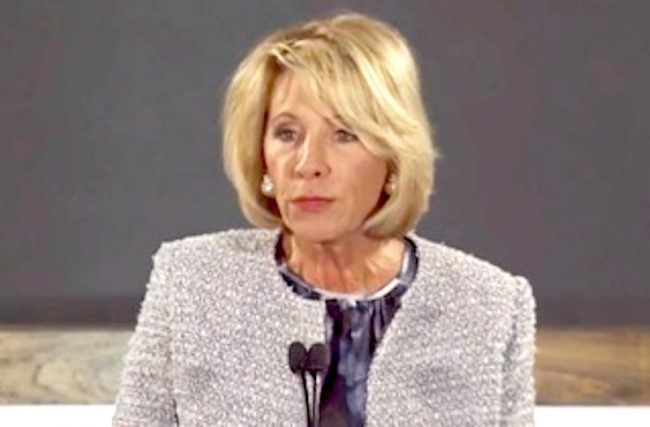 This morning, Betsy DeVos was confirmed as Education Secretary following a 51-50 vote by the Senate. Donald Trump‘s nomination of DeVos has been extremely controversial, because she doesn’t have much experience with the public school system, and because of the amount of money her family has donated to the GOP over the years. During her hearing, Senator Bernie Sanders straight up asked her if she would have gotten the nomination at all without her family’s donations.

Celebrities are reacting to the confirmation on Twitter and many of them are extremely disappointed:

Betsy DeVos confirmed. What is also confirmed is that there is not one single man of courage in the Republican Congress.

Betsy Devos got confirmed. Everyone who voted for her should be ashamed. Party before country. They're using children's education as pawns.

The swamp is being drained and filled with Chuck E. Cheese sea of plastic balls.

By the way, DeVos is 100% courtesy of Mike Pence. You think Trump gives a shit about charter schools?

I will fight as much as I can on behalf of children with disabilities. We can NEVER give up. https://t.co/Tx6yh7rQOR

The U.S. Senate Republicans who just put through the most unqualified Education Secretary in our history have just betrayed our kids. F#*k U https://t.co/wRPLbq3zjQ