Esquire: The Right Has Roger Ailes, The Left Has Jon Stewart 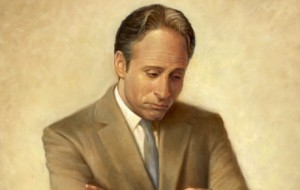 In the latest issue of Esquire, writer Tom Junod analyzes the serious side of The Daily Show and compares comedian Jon Stewart to Fox News president Roger Ailes.

Junod devotes most of the article to Stewart’s serious side, suggesting in recent years it has influenced and guided his work more than his comedic side. Talking about Stewart’s memorable and contentious interview with Chris Wallace a few months ago, Junod calls the comic “smug and condescending without bothering to be funny at all.” He claims that Stewart has become the very thing he has parodied for so long:

Some media pundits thought Stewart’s “jumping the shark” moment came during his Rally to Restore Sanity and/or Fear last November, but Junod believes it started in 2004, when he made his infamous appearance on the late CNN program Crossfire. He details a pre-show conversation between Stewart and liberal host Paul Begala, where Begala noticed that Stewart appeared to look nervous.

What Begala didn’t know, of course, was that Stewart was nervous in the way that Michael Corleone was nervous when he walked out of the bathroom of the Italian restaurant with more than his dick in his hand. He’s a great reflexive comic who’s made his living reacting — or appearing to react while scripting his reactions — on The Daily Show, but on this day, he, Jon Stewart, had Something to Say. “I thought he was going to push his clever book that had just come out,” Begala says. “But he wanted to be more serious. He came out and started tearing into us. It was funny and pointed, and it was great TV before the whole thing got derailed and the name-calling started.”

He addresses Stewart’s coverage of the 9/11 health care bill, his 2009 takedown of Jim Cramer, and the brief Rick Sanchez controversy. But perhaps the most damning part of the article comes when Junod talks about The Daily Show‘s recurring Fox News coverage, quoting a former writer as admitting he left because the staff was “running out of targets,” and directly compares the influence of Jon Stewart to a man he has mocked many times before: Roger Ailes.

Stewart gives Fox’s hosts something to complain about — confirmation that the media is “biased” and the game rigged against them — but Fox gives Stewart a reason to exist, and he’s been obsessed with Roger Ailes ever since he went to O’Reilly’s studio and was summoned into Ailes’s office… It’s that Ailes is all about power and so has accepted the obligation that Stewart has proudly refused. You want to know the difference between the Left and the Right in America? The Right has Roger Ailes, and the Left has Jon Stewart; the Right has an evil genius, while the Left contents itself with a genius of perceived non-evil.

That’s a comparison no one is really going to take well.