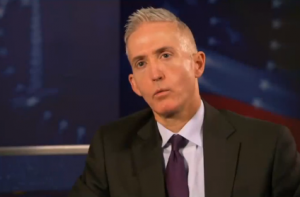 Brad Podliska, an ex-staffer on the House Benghazi Committee, filed a lawsuit Monday against the committee and Chairman Trey Gowdy, accusing Gowdy of defamation and discrimination after ousting the investigator from the Benghazi panel last month.

The suit alleges the “committee’s investigation changed significantly to focus on Secretary of State Hillary Clinton and the State Department, and deemphasize the other agencies that were involved in the Benghazi attacks and the aftermath of the attacks,” and that Podliska’s failure to make Clinton the focal point of his investigation was what led to his termination.

Podliska also said his status in the military played a role in his firing; he accuses the committee of singling him out after discovering the Air Force Reserve major had to go on assignment to Germany for a month.

The suit also paints the rest of committee in a less-than-flattering light, accusing committee members of drinking alcohol during work, and arranging for nonpartisan staff members to hide documents from Democratic members.

The House Benghazi Committee has come under fire from Podliska before. Upon his termination, Podliska told CNN the panel was engaging in a “partisan investigation” aimed at derailing Clinton’s presidential ambitions.