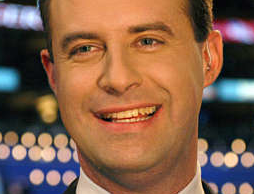 Ex-MSNBC host David Shuster emerged after months off the air, and came out firing at Fox News and Glenn Beck.

Shuster, who explained his sudden departure from MSNBC as amicable and caused by his interest in “looking around” for other work (Shuster was widely believed to have been auditioning for an anchor role at CNN) and “we had a disagreement about what happened.”

Shuster, filling in on the Jim Bohannon radio show Wednesday, told listeners MSNBC could not be compared to Fox News:

“MSNBC will never be as liberal as Fox is conservative.”

Mentioning a recent–and debated–study that found Fox News viewers were far more likely to be misinformed than viewers of other cable news, Shuster said “most of Fox News is not dedicated” to the kind of journalism exemplified by what he sees as the small number of “terrific journalists” at Fox. Shuster named Shepard Smith as an example, saying of the rest:

“It’s dedicated to a very sharp point of view,” he said, adding that there’s “ample evidence on a daily basis” that Fox News is committed not to impartial news coverage, but “partisan politics.”

Shuster specifically singled out Glenn Beck, calling Beck “abhorrent” for a recent segment where the Fox host accused George Soros of “helping send the jews to the death camps.” Shuster said “that kind of stuff just would never fly at any other organization but Fox News.”

As for what Shuster’s been up to during his time off the air–and what he’s going to be doing next–Shuster said he did some volunteer work, took master’s classes at Georgetown, and pondered the future of journalism, and how “to take it to the next level.”

Shuster said it’s likely he’ll be revealing his next move early in 2011–something that will involve investigative reporting on government spending and corruption. “I think there’s a tremendous appetite for it.”