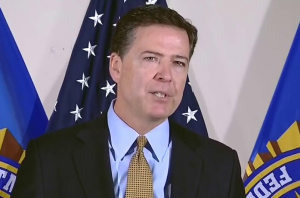 The FBI inquiry into the Clinton email scandal came to an ignoble end Tuesday in a manner that few could have predicted: one of the nation’s highest-ranking civilian law enforcement officers laying out for a full ten minutes all the evidence indicating that a Secretary of State broke the law, followed by the Shyamalanian twist that he didn’t believe said Secretary should be prosecuted.

And yes, by any straightforward interpretation, Hillary Clinton broke the law. The law bans negligently hosting classified information in an unauthorized location. By FBI Director James B. Comey‘s account, Clinton stored information on her private email server that any State employee– let alone the Department head– would have known immediately known was highly-classified top secret information. More to the point, despite Clinton’s frequent protestations to the contrary, he confirmed that some of those emails were indeed marked classified at the time.

Comey didn’t even particularly go out of his way to hide Clinton’s guilt, beginning by summarizing the statute in question…

…only to later say this.

For example, seven e-mail chains concern matters that were classified at the Top Secret/Special Access Program level when they were sent and received. These chains involved Secretary Clinton both sending e-mails about those matters and receiving e-mails from others about the same matters. There is evidence to support a conclusion that any reasonable person in Secretary Clinton’s position, or in the position of those government employees with whom she was corresponding about these matters, should have known that an unclassified system was no place for that conversation. None of these e-mails should have been on any kind of unclassified system…

The key words in that second bolded section by the way are “any reasonable person.” As any 1L student could tell you, the “reasonable person” standard is the exact test used by American judges and juries to determine whether or not someone is guilty of gross negligence. It’s not an exaggeration to say that Comey literally laid out the exact argument law enforcement would have made for prosecuting Clinton. I also predict the FBI press team will receive dozens of questions in the coming months asking why “extremely careless” and “grossly negligent” aren’t the exact same thing given that, you know, they’re the exact same thing.

When Comey finally came around to stating the reasoning behind the FBI’s decision not to recommend charges, his argument was based not on whether she committed a crime (again, because she did), but “the context of a person’s actions, and how similar situations have been handled in the past.”

In looking back at our investigations into mishandling or removal of classified information, we cannot find a case that would support bringing criminal charges on these facts. All the cases prosecuted involved some combination of: clearly intentional and willful mishandling of classified information; or vast quantities of materials exposed in such a way as to support an inference of intentional misconduct; or indications of disloyalty to the United States; or efforts to obstruct justice. We do not see those things here.

Translation: Hillary Clinton broke the law, but not badly enough for us to care.

I wonder how much the FBI’s logic in this case will be applied going forward. If the FBI finds they’ve only ever prosecuted counterfeiters that produced $1,000 or more in false currency, will I get off for making $200? What other crimes will go unprosecuted just because they couldn’t find any evidence they had ever faced a similar situation? What other crimes have a second secret definition that has to be met before the federal government decides they should act?

To state my objection more clearly, Comey argues that Clinton shouldn’t be prosecuted because her violations of the law don’t meet the prevailing standards, but never bothers to explain why those standards ought to be controlling in any case, let alone this one. On the contrary, one could make the case that as a cabinet-level official, Clinton ought to be held to a higher standard than the everyday grunts.

All this is made all the more irritating by Comey’s statement that “no reasonable prosecutor” would bring charges and his dismissal of those who would inevitably criticize his decision by saying “opinions are irrelevant.” In the end, Comey’s decision was an opinion; it was a value judgment on whether or not, letter of the law aside, Clinton’s conduct was immoral enough to warrant charges. That is certainly something that reasonable people can disagree on, prosecutors and otherwise.

I’m reminded incidentally of the Clinton impeachment trial. The legal arguments that Bill Clinton did not perjure himself were always weak, with Clinton forced to pedantically argue that oral sex was not “sexual relations” and perhaps the word “is” does not mean “is.” But the Clinton administration never really bothered presenting the legal arguments to the public: instead they insisted it was “just sex,” a trivial matter, politically motivated, part of a vast right wing conspiracy, etc. Clinton’s impeachment lawyers even cited his high approval ratings during the proceedings.

Again, the message was clear: Bill Clinton probably broke the law, but not badly enough that you should care.

It’s an argument that has some merit, frankly. We’ve known all election that Hillary Clinton broke the law: she illegally filmed a campaign event in the New York subway in clear contravention of the law. No one seriously suggested she should be prosecuted for that crime because everyone realized that the offense was minor, inadvertent, and rarely enforced. There’s a broad bipartisan consensus in favor of prosecutorial discretion.

But prosecutorial discretion is only a tool for justice when applied equally across the board. As Comey himself admitted, the Clinton decision does not “suggest that in similar circumstances, a person who engaged in this activity would face no consequences.” Perjury and stealing classified government documents are crimes that would see mere mortals thrown in prison, but time and time again the Clintons and their consiglieres get to skate.