For Those That Find Birtherism Passe: Blogs Report On Obama’s ‘Brain Surgery Scars’ 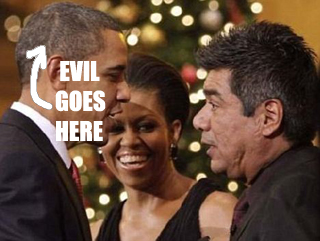 A lot of the times we miss out on the latest and greatest Barack Obama conspiracy theories that aren’t being promoted by legitimate presidential candidates. This is especially true ever since I started blocking emails from my aunt who was positive that Obama held a “Pimps and Ho’s Party” at the White House (Sorry, Aunt Becky. If you’re hosting Christmas this year, you’re gonna have to call me by phone about it). Anyway, thank goodness for Wonkette picking up on this article from The Daily Mail. You’d think we’d be annoyed at the British tabloid printing unsubstantiated rumors about our president, but how else would we know about Obama’s sinister brain surgery scars! Now that’s an awesome conspiracy.

The Daily Mail piece collects some theories from bloggers who noticed an odd pattern in Obama’s hair in pictures of he and George Lopez. Not content to ask the obvious questions (when and why Obama was hanging with George Lopez in the first place?), the bloggers dug deeper and realized that the hair pattern was clearly a scar from brain surgery.

“Ben Hart, a blogger for Escape The Tyranny a website which presents itself as a Social Network & Forum For Conservatives, said: ‘Obama’s almost done with his first term, and we still know almost nothing about the background of the President of the United States.

‘Whatever happened to create that scar, it was clearly something serious. Was it a brain operation? Has it affected his thinking?

‘No one is allowed to see his birth certificate. He is just one big mystery man, which adds intrigue to what that huge scar is all about.’

He also said that surgery might explain why the President gets lost speaking without a teleprompter, and posted a video of Obama struggling through a speech, repeating his words and getting lost mid-sentence.”

My first question was why the most powerful man in the world couldn’t get his hands on a surgeon who wouldn’t leave noticeable scars. But then I realized Obama probably used some cheap surgeon…in Kenya!

I had some more questions but, unfortunately, I got distracted by The Daily Mail’s photos of Christine Hendricks in a nightie. Hopefully some legitimate, real, totally serious presidential candidate will pick up this story and talk about it on every news show ever for three weeks straight so that I can learn more.