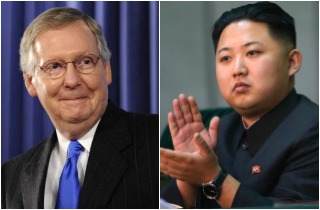 Guns and North Korea — two topics that have been in the news quite a bit recently, and both potentially dangerous. In fact, in a column published on Tuesday, Foreign Policy‘s David Rothkopf compared the threat posed to the U.S. by “Americans with guns” versus that posed by North Korea. The former, he asserted, is “immeasurably” greater.

“Kim Jong-un is no Mitch McConnell,” Rothkopf writes. The “chubby little autocrat is very unlikely to cost one American his life,” while McConnell, by threatening to filibuster gun legislation, “all but guarantees that the toll in America’s street-corner war will continue to rise.”

He calls out cable news in particular for the way the networks have played up the Korean threat while lamenting McConnell’s stance as “more or less as business as usual.” No, the threats aren’t comparable, Rothkopf contends — but, in this case, the gun debate poses a larger one:

Citing the Republicans approach the gun issue, Rothkopf corners Senate Democrats as being the only ones who can lead the way to resolving the issue. “It should be clear to those who care about U.S. national security,” he argues, “that the tin-pot demagogues Americans ought to fear the most are the ones they elected right at home.”