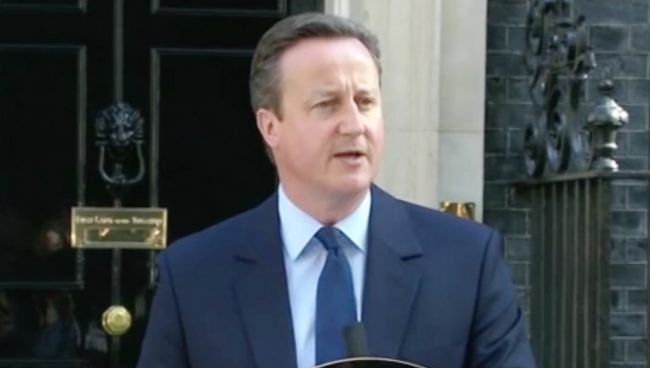 The White House had to smooth things over with the United Kingdom recently over President Trump‘s wiretapping claims, but as far as David Cameron is concerned, it’s all a laugh to him.

The former British Prime Minister appeared at Brown University on Monday night in order to deliver the 94th Ogden Memorial Lecture on International Affairs. The Providence Journal reports that Cameron’s speech touched on subjects such as Brexit, international politics, and the special relationship between the U.S. and the U.K.

Eventually, Cameron offered an amusing quip about one good thing in his life now that he’s no longer in office:

I don’t have to listen any more to the wiretaps of Donald Trump’s conversations.

Moments later, Cameron confirmed it was all in good fun by clarifying: “That’s a joke.”

The joke was a reference to how Press Secretary Sean Spicer recently cited a report advanced on Fox News which suggested that the Government Communications Headquarters (GCHQ) helped Barack Obama surveil Trump Tower during the 2016 election. The GCHQ swatted down the report as “nonsense” and FBI director James Comey has also said he hasn’t seen evidence to back up Trump’s assertions.

Cameron also made remarks about Russian President Vladimir Putin, saying “I’m very fond of riding horses, but I don’t look quite the same with my shirt off.”