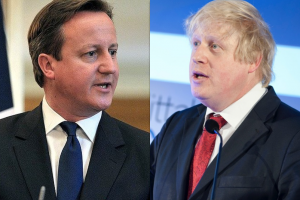 “Turmoil” would not be too strong of a word to describe what the state of the world — as least Britain — has been in the last few days.

In response to Britain’s in/out referendum vote late Thursday that resulted in 17 million people opting out of the European Union, many have decried the effort in hindsight. The Prime Minister David Cameron immediately announced he would be stepping down, leaving the future of the British people drowning in uncertainty as to what such a historic move means for the decades-old partnerships between the countries of Europe.

A “regrexit” movement has even been building in response, with millions of people calling for a second referendum to counter the vote of the first one.

But now, a theory has emerged on the internet that may explain how David Cameron — who stood outside 10 Downing Street Friday and told reporters, “I do not think it would be right for me to be the captain that steers our country to its next destination,” — may be in the driver’s seat after all.

Posted into the comments section of a Brexit article on The Guardian, one user surmises that former London mayor and “Vote Leave” champion Boris Johnson may not be so thrilled to have gotten the votes. To make matters worse, Cameron unexpectedly stepping down Friday may have really put the pressure on the Leavers to deliver nearly impossible goods.

If Boris Johnson looked downbeat yesterday, that is because he realises that he has lost.

Perhaps many Brexiters do not realise it yet, but they have actually lost, and it is all down to one man: David Cameron.

With one fell swoop yesterday at 9:15 am, Cameron effectively annulled the referendum result, and simultaneously destroyed the political careers of Boris Johnson, Michael Gove and leading Brexiters who cost him so much anguish, not to mention his premiership.

Throughout the campaign, Cameron had repeatedly said that a vote for leave would lead to triggering Article 50 straight away. Whether implicitly or explicitly, the image was clear: he would be giving that notice under Article 50 the morning after a vote to leave. Whether that was scaremongering or not is a bit moot now but, in the midst of the sentimental nautical references of his speech yesterday, he quietly abandoned that position and handed the responsibility over to his successor.

And as the day wore on, the enormity of that step started to sink in: the markets, Sterling, Scotland, the Irish border, the Gibraltar border, the frontier at Calais, the need to continue compliance with all EU regulations for a free market, re-issuing passports, Brits abroad, EU citizens in Britain, the mountain of legislation to be torn up and rewritten … the list grew and grew.

The referendum result is not binding. It is advisory. Parliament is not bound to commit itself in that same direction.

The Conservative party election that Cameron triggered will now have one question looming over it: will you, if elected as party leader, trigger the notice under Article 50?

Who will want to have the responsibility of all those ramifications and consequences on his/her head and shoulders?

Boris Johnson knew this yesterday, when he emerged subdued from his home and was even more subdued at the press conference. He has been out-manoeuvred and check-mated.

If he runs for leadership of the party, and then fails to follow through on triggering Article 50, then he is finished. If he does not run and effectively abandons the field, then he is finished. If he runs, wins and pulls the UK out of the EU, then it will all be over – Scotland will break away, there will be upheaval in Ireland, a recession … broken trade agreements. Then he is also finished. Boris Johnson knows all of this. When he acts like the dumb blond it is just that: an act.

The Brexit leaders now have a result that they cannot use. For them, leadership of the Tory party has become a poison chalice.

When Boris Johnson said there was no need to trigger Article 50 straight away, what he really meant to say was “never”. When Michael Gove went on and on about “informal negotiations” … why? why not the formal ones straight away? … he also meant not triggering the formal departure. They both know what a formal demarche would mean: an irreversible step that neither of them is prepared to take.

All that remains is for someone to have the guts to stand up and say that Brexit is unachievable in reality without an enormous amount of pain and destruction, that cannot be borne. And David Cameron has put the onus of making that statement on the heads of the people who led the Brexit campaign.

The post — which has been shared thousands of times on social media since it went up Friday — suggests that Cameron’s exit puts the onus squarely on the shoulders of Johnson, who championed a big red bus in recent months calling for Britain to leave the EU. But now, as a result of the hairy bureaucracy and red-tape associated with undoing decades of trade partnerships and passport declarations, Johnson, “has been out-manoeuvred and check-mated.”

Boris Johnson’s tone seems to have decidedly shifted in the days since declaring victory. As the International Business Times reported, Johnson, “made [a] sombre speech just hours after David Cameron announced his intentions to resign,” and today is calling for strengthened ties to the Remain camp who wished to uphold its membership status with the EU.

“We who are part of this narrow majority must do everything we can to reassure the Remainers,” Johnson wrote in the Daily Telegraph. “We must reach out, we must heal, we must build bridges – because it is clear that some have feelings of dismay, and of loss, and confusion.”

A narrow majority indeed… 51.9% of voters opted for Leave versus 48.1% of Remainers.

So what do you think? Was the resignation move on the part of Cameron a keen political ploy to screw over Johnson and his Leave movement fanatics? Cameron has said that he plans to be out of office by the start of the Conservative Party leadership election in October, and Johnson is widely considered to be the man set to replace him as PM. Read the full original post below: 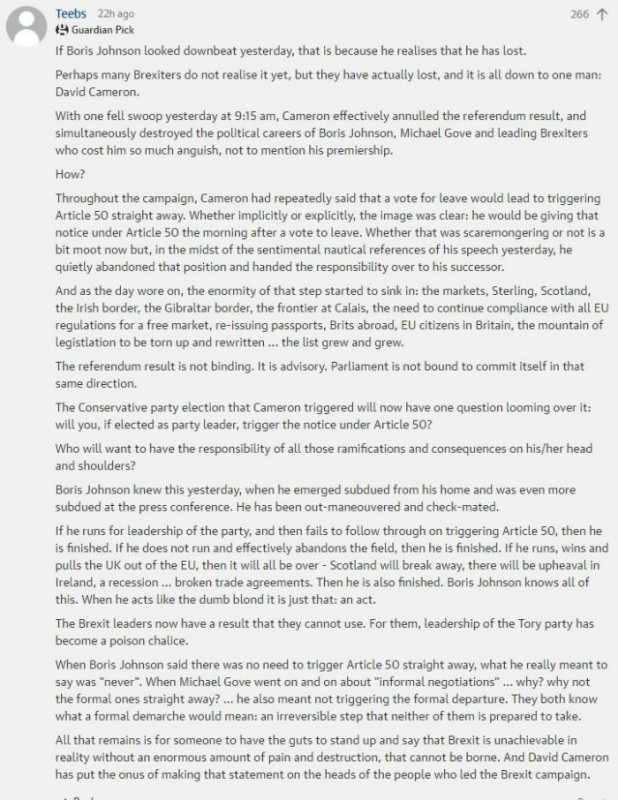 —
J.D. Durkin (@jiveDurkey) is an editorial producer and columnist at Mediaite.
[images via Wikipedia Commons and Flickr]