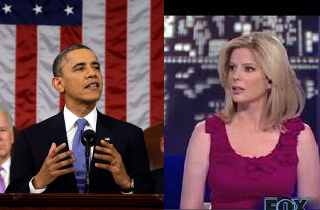 In her USA Today column today, Fox News contributor Kirsten Powers tore into the president’s fourth State of the Union speech from the left, calling parts of the speech “manipulative,” “empty,” and “underwhelming.”

“If the State of the Union address Tuesday night is any indication, it appears President Obama‘s chief speechwriter has been replaced by a cliché-generator circa 1960,” Powers began. “His erstwhile oratory was a melee of cringe-inducing lines ripped straight from a sit-in.”

Despite being a liberal, Powers has not been shy in criticizing the president from the left. “The president has only a few opportunities to speak to the nation, and he blew this one,” she bluntly wrote. “It was so hackish, so devoid of any theme or purpose, that it makes one wonder whether part of Obama just wants to see how bad he can be before his cultists in the news media can see it. Every speech is exactly what they wish it to be, regardless of reality.”

Contrary to what the media seems to believe, she wrote, “Obama is not a liberal visionary with deep desires to institute a progressive agenda. If he is, he’s a miserable failure. You need look no further than his own record.”

She called his “edict” on climate change “despotic, not liberal” because, despite her agreement that climate change is man-made and needs to be addressed, she saw Obama’s “either do what I say or I will just start issuing executive orders” attitude as “not the kind of governing we should be lauding, regardless of party or ideological bent.”

As for the president’s gun control remarks, which received “thunderous” applause within the chambers, Powers was non-plussed. “His plea on gun control was manipulative and empty,” she wrote. “It worked thematically, but failed on substance. The only point was to make Republicans look bad, while simultaneously lecturing about compromise and the importance of working together.”

Her conclusion: “That this underwhelming State of the Union – substantively and stylistically – will be treated as a serious effort reveals the bad shape our country is really in.”