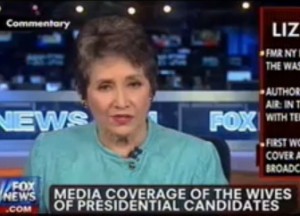 A recent commentary by Fox News contributor Liz Trotta is such an obvious and ham-fisted attempt to bait liberals (and other full-time residents of the 21st century) that it’s tempting to ignore it. Chock full of nonsense about a supposed “double-standard” between coverage of First Lady Michelle Obama and prospective FLOTUS Ann Romney, Trotta’s “look at me, I’m not PC!” commentary does have value as a textbook example of the right’s tortured persecution complex.

The fulcrum for Ms. Trotta’s rant is a contrast between media reaction to Ann Romney’s $990 t-shirt and the $6800 jacket worn by Mrs. Obama at the Olympics (a rep for the designer, J. Mendel, tells Mediaite that the jacket was a loaner). According to Trotta, Ann Romney’s t-shirt was a “scandal,” while Mrs. Obama’s jacket “drew nods of approval from the media.”

Along the way, she points out how the press hounded Jackie Kennedy about her wardrobe, until she put her foot down, and how Mrs. Romney’s use of dressage for therapy was “unacceptable to critics,” while the media made a “big story” about a Kennedy woman falling off of her horse, but weren’t quite mean enough about it for Trotta, and digs up the Hilary Rosen flap as evidence that “the ladies of the press (so un-PC!!!) really believe they’re acting on principle, except that the principal is driven by envy, envy by a woman who managed to do exactly what their mothers told them, although they would never admit it; marry a good, preferably rich man, raise your children full-time, and of course, dress like a lady. Come on, girls. Play fair.”

The truth, of course, is that there were no “ladies of the press” attacking Mrs. Romney over her t-shirt, unless you count Lawrence O’Donnell, and a random column here or there, and nobody, lady, press, or otherwise, indicated that Mrs. Romney’s use of dressage for therapy was “unacceptable,” although O’Donnell did make an issue of the Romneys’ horse being used as a business deduction.

On balance, the coverage of Mrs. Romney has been overwhelmingly positive, and as Trotta even points out, when Hilary Rosen made a perfectly reasonable observation about something Mitt Romney said on the campaign trail, the entire universe rose up to smite her like Cthulhu on a Red Bull bender.

Facts aren’t the point, though. Generating outrage from liberals and smug satisfaction from the Fox News audience over such anti-PC boldness is job one, and promoting the myth of conservative media victimization is a close second. Conflating partisan cable news personalities with “the press” is a tried-and-true tactic of right-wing watchdogs like Newsbusters, as is ignoring actual offenses by the media outlets they like.

That brings us back to Liz Trotta delivering a rant about the nonexistent persecution of Ann Romney on Fox News…the same network whose hard news anchors, not their opinion hosts, accused Mrs. Obama of employing a secret terrorist greeting and called her “Obama’s Baby-Mama,” the same network whose guests and opinion hosts have been attacking Michelle Obama for a little over four years now, while generously (but conditionally) calling off a “lynch mob” against her, the same network on which Liz Trotta joked about making Mrs. Obama a widow. Inventing a media grudge against Ann Romney is not a “Fair” way to “Balance” that out. I believe the words they’re looking for are “We’re sorry.”