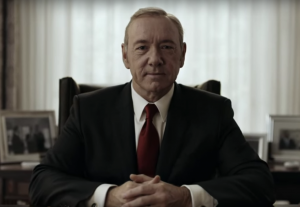 Although the figures haven’t quite come in yet, all signs indicate that Tuesday night’s Republican debate was a ‘yuuuuge’ win for CNN. Viewers at home and Young Republican watch parties across the nation enjoyed a sparring match between Donald Trump and Jeb Bush, as well as some great post-contest fireworks too.

But millions were treated, unexpectedly, to a :30 commercial on CNN that opened much like any other candidate’s advertising would. Sweeping shots of Americans hard at work were covered with a voiceover saying, “It’s a new day in America,” subtly nodding towards the famous Ronald Reagan ads of the 1984 campaign. The candidate that the ad was promoting?

“America, I’m only getting started,” says the longtime South Carolina Congressman and current President of the United States (in an alternate Netflix world where people get casually shoved in front of trains, of course) in his best Macbethian direct-to-camera.

The commercial promotes the fourth season of the hit Netflix series, due out March 4th, just three days after Super Tuesday and the SEC Primary for the 2016 campaign (in real life). The ad also endorses the interactive website devoted to season 4: www.fu2016.com.

Fans of the show took to Twitter during the debate to express their thoughts for the return of the hit show the dramatizes (or does it?) the cut-throat nature of the power-grabbing Beltway.

I feel like Frank Underwood was a much more compelling character before the 2016 campaign got underway.

Here’s the #FU2016 ad that was brilliantly placed on CNN tonight. I never thought of his initials as FU before. https://t.co/ZlYZEDufxv