Franklin Graham: Muslims In America Are Here To Build Mosques And Convert People 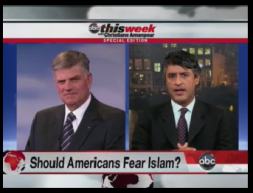 Yesterday This Week devoted the entire hour to a special town hall meeting on America and Islam. One of the participants in the town hall was Franklin Graham, son of Billy, who made headlines over the summer when he said President Obama was “born a Muslim, his father was a Muslim. The seed of Islam is passed through the father like the seed of Judaism is passed through the mother.”

During yesterday’s town hall, which included Peter Gadiel and Donna Marsh O’Connor both of whom had lost family members on 9/11, Graham explained Islam to Christiane Amanpour thusly:

“They want to build as many mosques and cultural centers as they possibly can so they can convert as many Americans as they can to Islam. I understand that.”

“Sure,” the Revered said. “And I understand what they’re doing. … But let me just say something about Islam. I love the Muslim people. But I have great difficulty with the religion, especially with Sharia law and what it does for women — toward women, toward non-believers, the violence that is given in — under Sharia law.”

Emphasis mine, because really, how could anyone conclude otherwise. When asked if there was any shred of proof that Muslims were trying to bring Sharia law to America Reza Aslan (whose appearance on MTP I found so impressive a few weeks back) said “no, not a single shred whatsoever.”

I think someone needs to remind Franklin Graham that we don’t judge our values in the United States by comparing them to what the Saudis do. This is a common refrain you hear from a lot of anti-Muslim activists in the United States…this is an appalling and laughable argument.

Graham responded that he doesn’t believe in Islam, “I don’t believe a word of it.” Segment below. It was an interesting special for This Week, though in the end, sadly, it mostly just succeeded in highlighting how deep the divide currently is between Islam and America.