Gallup: Approval Of Black/White Intermarriage At An All-Time High 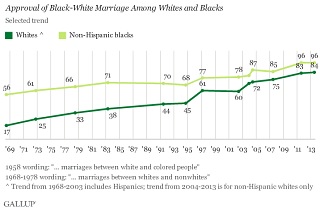 And in other news, we’re still asking about black-white intermarriage. In one of several recent Gallup polls on racial issues, approval of black people marrying white people has ticked up a whole percentage point since 2011, to 87%, and is even at 84% among white people. However, 75% of white people still don’t understand that the American justice system is biased against black people, and while a majority of white people and black people support affirmative action, the also don’t. Finally, black and Hispanic people don’t really care if you call them black or African American, and Hispanic or Latino. That will be a relief to all the people in 1991 who are still wondering about that.

The intermarriage and criminal justice questions suffer from the same assumption that other recent polls have, which is that the demarcation line on these questions must necessarily be race. Gallup didn’t even bother to crosstab these questions by party or ideology, which severely hampers their usefulness.

For example, on intermarriage, they break it down by race, but also by age, as if we didn’t already know old people are more racist. A quick glance at their chart, though, gives the impression that, whatever racial problems linger, at least we’ve fairly unanimously (though not as unanimously as background checks) put this question to bed: 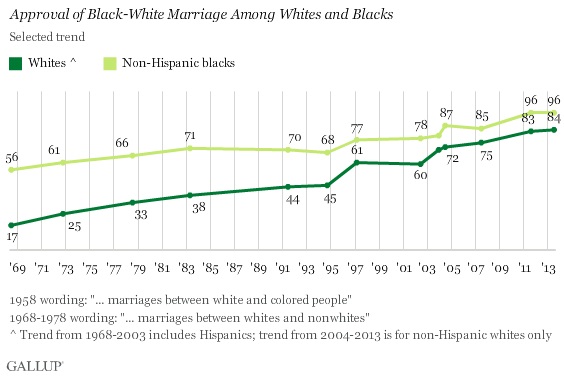 However, other polls on racially-charged issues show a sharp partisan divide, which would be a useful thing to know about on this question. If 16% of whites disapprove of black-white intermarriage, but most of them are of one party or ideology, that would be a significant finding that would suggest there’s more work to be done, and how it can get done.

Similarly, Gallup doesn’t crosstab its criminal justice question by party or ideology, leaving the reader to conclude that either black people are too sensitive, or white people are dicks, or some combination of the two. But if the problem isn’t really a racial one, but one of political belief, then the solution is quite different. Black-white “chasms” feed narratives that are attractive to both sides of the conversation on race, but they’re not accurate or productive. If the problem with white people isn’t necessarily that they’re white, but that they just believe the wrong thing, that’s a whole lot easier to fix.

I normally hate complaints of question bias in polls, but this is pretty glaring, an explicit framing of racial diversity as being without merit, and it suggests that perhaps Gallup ought to work on having a more diverse array of viewpoints in the room when they’re thinking up their questions.

Finally, before we start breaking our arms patting ourselves on the back about that intermarriage poll (and 16% is actually still a lot), take another look at Gallup’s chart. Support for black-white intermarriage didn’t crack 50% until 1997, which means that the year Trayvon Martin was born, most Americans would not have approved of him marrying a white person. However far you think we’ve come, it hasn’t been for that long.