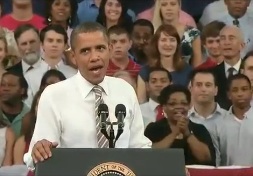 In an attention-getting game of journalistic Six Degrees of Kevin Bacon, Gawker‘s John Cook is reporting that The New York Times might be working on a report that President Obama is depressed. Citing a “source inside the Times,” Cook offers a preemptive critique of such a report, and leaves open the possibility that the end product could be watered down from that clinical premise.

Either way, the President sure looks like he’s having fun these days.

Here’s how Cook lays it out:

We’re told by a source inside the Times that the paper is preparing a story arguing that Obama no longer finds joy in the political back-and-forth, has seemed increasingly listless to associates, and is generally exhibiting the litany of signs that late-night cable commercials will tell you add up to depression. Or maybe Low T.

Either way, the investigation was described to us as taking seriously the notion that Obama may be suffering from a depressive episode. Of course, absent a telltale Wellbutrin prescription or testimony from the man himself, it’s really impossible to achieve a reliable diagnosis. And a story like “Obama Appears to Suffer From Depression” can be easily downgraded to “Political Travails Begin to Take Personal Toll on Obama.”

It’s possible that Cook’s source is floating a trial balloon to see just how derisively such a “thought piece” would be met, since he’s absolutely right that, unless someone violates federal privacy laws, there’s little they could produce to support such a story. This smacks of the same kind of pop psychology that people used to try on George W. Bush on a slow news day.

I’ve seen this kind of reporting-on-reporting before (which makes me the M.C. Escher of reporting-on-reporting, I know), specifically about the Times, and often, the anticipated story never appears, quite possibly due to the sinking of a trial balloon like this. Show me some My Chemical Romance doodles on the President’s daily briefing book, and you might have something. Unnamed groundskeeper who thinks he looks mopey? Not so much.

Having covered both Barack Obamas, Campaign Obama and Governing Obama, for going on four years now, there have been times when such a story might have made some sense, but from my armchair, the President looks like he’s getting pretty revved up right about now. That’s not to say that the office hasn’t taken a toll on him, or that he’s not under a lot of stress. He’s the President of the United States, not a cashier at Starbuck’s. But whether he’s campaigning for jobs and growth, or campaigning for reelection (or a little of both), President Obama sure as hell looks like he’s got a spring in his step these days.