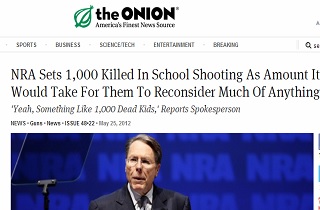 In what must be a brilliant bit of double-reverse super-secret satire, right-wing sites like Newsbusters and Michelle Malkin‘s Twitchy have “busted” actor Rainn Wilson and activist/filmmaker Michael Moore for “citing” what they call a “Fake Onion Article About NRA as Fact.”

They’re referring to a tweet from Rainn Wilson which read: NRA Sets 1,000 Killed In School Shooting As Amount It Would Take For Them To Reconsider Much Of Anything …,” and linked to the famous news parody site The Onion.

In a bit of genius self-satire, Newsbusters humorlessly reported on Wilson’s tweet, and another by Michael Moore, this way:

Wealthy filmmaker Michael Moore and Rainn Wilson, an actor best known for his role in the American version of “The Office,” referenced a parody article at The Onion in tweets on Wednesday, duping a number of their followers, Twitchy reported.

“NRA Sets 1,000 Killed In School Shooting As Amount It Would Take For Them To Reconsider Much Of Anything,” Wilson tweeted, without mentioning the source of the article. He did provide a link to it, however.

Twitchy said that if Wilson knows The Onion is a parody site, he’s not admitting it.

…Some told Wilson that The Onion is a parody site, but to no avail.

Unlike Wilson, Moore referenced The Onion, but, Twitchy said, he failed to tell followers the article is fake.

“Harry Reid may not have a number of how many dead kids it’ll take before he acts, but The Onion says the NRA has one,” he tweeted.

Newsbusters’ Joe Newby must know that neither man “cited” The Onion article as “fact,” but rather, relied on their Twitter followers to not be complete morons, but if he does, he’s not admitting it. Also, what does “Fake Onion Article” really mean? Was it not really from The Onion, or was it from The Onion, but not a genuine parody, which would make it true?

Either way, The Onion‘s parody is eerily prescient. It came out in May of 2012, 7 months before the Newtown tragedy, and before the mass shootings in Aurora, Colorado and Oak Creek, Wisconsin, but still managed to capture the NRA’s post-Newtown ethos with, as it turns out, surprising generosity:

National Rifle Association Executive Vice President and CEO Wayne LaPierre said Monday that somewhere around 1,000 kids would have to die in a school shooting in order for the organization to reconsider their longstanding opposition to gun control.

“Yeah, that’s probably the only way we’d reassess much of anything at this point: 1,000 dead kids, shot up pretty good, lying face down in the school auditorium or something like that,” LaPierre said, noting that anything less than 1,000 dead kids would not be enough for the NRA to stop urging Congress to pass pro-gun legislation. “I mean, that’s just a ballpark number, but I imagine seeing 1,000 or so body bags being wheeled out of a school and a whole town of crying parents would probably make us reflect on our values for at least a little bit.”

“So yeah, more or less 1,000 dead kids,” LaPierre added. “Something around there. And teachers don’t count.”

While the numbers may be off, the sick punchline is that The Onion appears to have given the NRA too much credit for self-reflection, as there doesn’t seem to be anything that will make them rethink their support for portable arsenals and gun sales to terrorists.

Twitchy also wasn’t buying it that Wilson knew the article was a parody, but also mocked the two or three followers who appeared to maybe have been fooled by the tweet. Fair enough, but in their defense, what seemed absurd in May of 2012 isn’t all that divorced from the reality of today. Now, it seems more absurd that any number of innocents slain would faze the NRA, even a little.