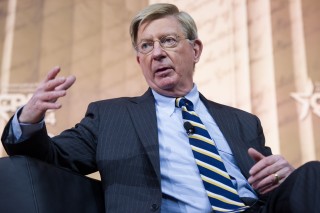 Conservative columnist and Fox contributor George Will has his own theory as to why Donald Trump has yet to release his tax returns.

Will believes that Trump has been doing business with Russian oligarchs, which would substantiate the claim of the DNC that they were recently hacked by Russians. Will did not bring forth any evidence to further back his claims.

The topic was brought up on Fox News’s Special Report after DNC officials suggested a link between the Russians and a recent DNC hack that released thousands of emails through Wikileaks. These emails were instrumental in creating outrage at the Democratic National Convention with many Bernie Sanders supporters believing that their candidate had been cheated by the DNC. In addition, Debbie Wasserman Schultz will step down following the end of the convention.

“Both the campaign chair and anybody you talk to, including Senator [Chris] Murphy (D-Conn.) would not go down that road once pressed on the connection between Russia and the Trump campaign. But they have thrown it out there. George?” Bret Baier asked Will.

“Well, it’s the sort of thing we might learn if we saw the candidates’ tax returns. Perhaps one more reason why we’re not seeing his tax returns because he is deeply involved in dealing with Russia oligarchs and others. Whether that’s good, bad or indifferent, it’s probably the reasonable surmise,” Will said in response.

Will has been very vocal in his disdain of Trump’s candidacy, even deciding to leave the Republican Party after Trump became the presumptive nominee.