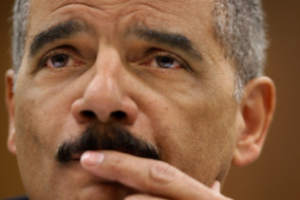 “What ever happened to INNOCENT UNTIL PROVEN GUILTY and DUE PROCESS?” demands a member of George Zimmerman‘s family in a letter sent to Attorney General Eric Holder this week, signed “a concerned Zimmerman family member.” The letter, which appeared in the Daily Caller today, expressed concern over “many in the black community” forming “lynch mobs” against Zimmerman, who they conclude is “the only person who has had their civil rights violated.” It also called for members of the New Black Panthers to come under arrest and compared the story to the novel To Kill a Mockingbird— but not how you might think.

“George has done more for the black community than a lot of the black individual/organizations that are calling for his arrest (or death),” the family member assures, and refuses to “go into the intricacies of the case.” Instead, they ask, “why, when the law of the land is crystal clear, is your office not arresting the New Black Panthers for hate crimes?” The letter goes on to quote the legal definition of a hate crime and ask, “Since when can a group of people put a bounty on someone’s head, circulate Wanted posters publicly, and still be walking the streets?”

Another fascinating bit from the letter is their insistence that the To Kill a Mockingbird analogy in this story is between George Zimmerman and Tom Robinson, the black man falsely accused of raping a young white girl because he ran away from her when approached, and subsequently killed in a prison escape attempt:

Strangely enough this case has a lot of parallels to those of Harper Lee’s ‘To Kill a Mockingbird. George Zimmerman has been treated much like Tom Robinson was, chastised for not being the right (or wrong) color and found guilty based on race factors. You have the opportunity to act as Atticus and do the right thing. Your boss would refer to this as a “teachable moment.”

The Daily Caller notes that the Department of Justice has not responded to the letter yet. You can read it in its entirety below:
Zimmerman Family Letter to Eric Holder — Email Redacted