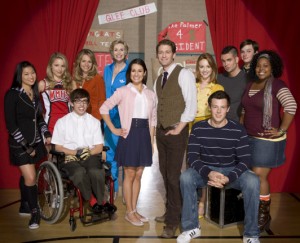 Fans of the new comedy shows Glee on FOX and Modern Family on ABC woke up to a pleasant surprise this morning, as the freshman programs got Golden Globes nominations for Best Comedy.

The awards show, which has a history of surprising nominations and favoring fresh shows and nominees, had a few more surprises in store in the actor and actress categories.

Glee had other nominations as well: Lea Michele in best actress and Matthew Morrison in best actor. The first season of Hung got Thomas Jane a nomination, as did the first seasons of Cougar Town for Courtney Cox, The United States of Tara for Toni Collette and Nurse Jackie for Edie Falco.

Best TV drama winner Mad Men and best TV comedy winner 30 Rock get a chance to defend their wins last year at this year’s January 17 ceremony on NBC. 30 Rock competes with Entourage and The Office in addition to the two new shows. Mad Men is up against the field from last year, with Big Love swapped in for In Treatment.

Not to rain on the parade, but the reaction on Twitter from TV critics felt like a collective 140-character groan. Alan Sepinwall, TV critic for the Star-Ledger, tweets, “Trying to parse any kind of meaning out of Golden Globe noms or awards is pointless. It amazes me we take them as seriously as we do.”

Here are the TV nominees, via THRFeed.com:

Here are the full list of motion picture nominees.