Glenn Beck Confronts Newt Gingrich, A Candidate With Whom He Has ‘Serious Concerns’
audio

Glenn Beck Confronts Newt Gingrich, A Candidate With Whom He Has ‘Serious Concerns’ 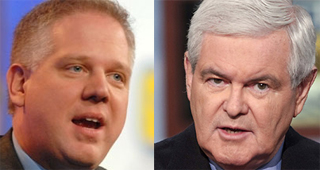 The big news story of the past week or so has seemed to be the surprising resurgence of Newt Gingrich, a candidate once thought dead in the water who’s now confident enough to declare himself the nominee before any primaries have even actually opened. However, while many Conservatives have rushed to throw their support behind the candidate, one who’s been more hesitant is Glenn Beck. Beck made that clear this morning in a tough call-in interview with Gingrich on his radio show. In fact, he opened the interview by telling listeners and his guest point blank that he had “serious concerns” about Gingrich.

“Newt Gingrich is a man that I’ve met several times. I’ve had dinner with him when we were in Washington, D.C. He seems like a very nice man. We don’t know each ?? we’re not buddies, but I have been around him enough to know that, you know, he’s a ?? he’s an honest guy, a decent guy that has always shot straight with me. I want to make sure that you understand and that he understands that this is not a gotcha interview. I have serious concerns with Newt Gingrich, but it’s not a gotcha interview. This is just, I’m asking questions because I truly, deeply care about the country just as much as Newt Gingrich does but we differ on the answers, I believe. I’d like to have him convince me that I’m wrong. I would love to have him convince me that I’m wrong.”

There’s been a lot of reports that Tea Partiers who had supported Herman Cain have been flocking to Gingrich. But, Beck seems to feel quite strongly that much of what Gingrich has said recently and throughout the years, flies in the face of their beliefs. After warning the candidate that the interview would be tough, he began playing a number of old sound bites and quotes as proof. He played a clip of Gingrich comparing himself to Theodore Roosevelt in regards to regulation, the infamous clip of Gingrich accusing Paul Ryan’s plan of being “right-wing social engineering,” and a few showing his belief in climate change.

Perhaps thanks to Beck’s warning, Gingrich seemed to have answers for most of these moments (he’s for some regulations but not choosing winners or losers, he doesn’t want to impose any plan on Americans notwithstanding who came up with it, and he “never believed in Al Gore’s fantasies”). In the end, Beck thanked him for his “willingness to come on and answer the tough questions” and wished him the best.

It was an interesting interview with a lot of good points brought up. One impressed listener was MSNBC’s Joe Scarborough, a man who, while not a fan of Beck, isn’t convinced with Gingrich. He tweeted about the interview shortly after it aired: Listen to the first part of the lengthy interview from GBTV below.

You can listen to the rest here. A transcript can be found here.